Everyone shed a tear for the American Family Association’s Sandy Rios.

Our society is getting to the point where Rios and other Christian bigots like her will never be able to use a public bathroom again! The only thing standing between her Religious Peedom and complete chaos is the AFA’s boycott of Target. 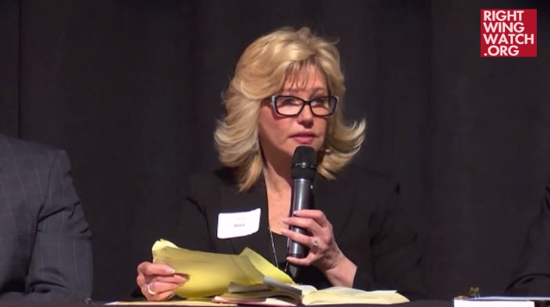 Rios told Breitbart’s Alex Marlow that the boycott “isn’t just about Target” but is about scaring other corporations and governments so that they don’t adopt similar policies and leave people like Rios with nowhere left to relieve themselves.

“If we do not keep the pressure on Target,” she said, “this will quickly — we know how major corporations are, they are scared to death of anything that isn’t politically correct — this will spread like wildfire, we will not be able to go to the bathroom anywhere.”

In fact, Rios can still use the women’s bathroom. Or one of the gender neutral bathrooms Target says it’ll be creating in all of its stores over the next year.

No one owes her and her friends a special space. She just has to learn how to share. I guess no one taught her that in Sunday School.