In a new trailer for evangelist Ray Comfort‘s movie The Atheist Delusion, his colleague Oscar Navarro briefly shares his personal journey from “militant atheist” to Christian.

And what makes him such a “militant” atheist? Was he getting into fights with Christians? Did he want to eradicate religion off the face of the earth?

Nope. He literally read some books. That’s it. 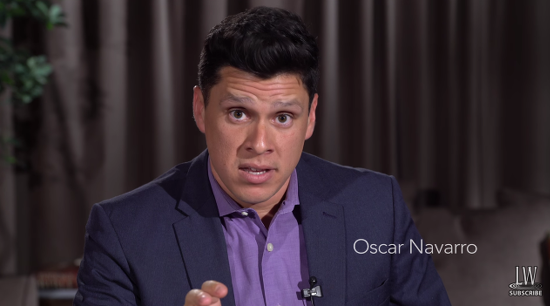 I was what I would consider a “militant atheist.” That is, I had read a stack of books, chest high, by Richard Dawkins, Sam Harris, Christopher Hitchens. At the time, Harris was one of my favorite authors. I had my talking points memorized and I craved the opportunity to talk to Christians about why they were wrong.

But the Gospel changed all of that for me. It transformed me. And it renewed my mind.

So much to the point that I would leave a prestigious position at one of the three largest investment banks in the world to go work with Ray Comfort. From an atheist — militant atheist — to working with Ray.

And I gotta tell you, I love our new movie. It cuts through the smoke and mirrors and addresses what it really is that would make someone claim to be an atheist. You gotta see it.

Here’s what fascinating about what Navarro says. He called himself “militant” because he had his “talking points memorized” and wanted to persuade the other side “about why they were wrong.”

Isn’t that exactly what he’s doing as a Christian now? Why doesn’t he call himself a “militant Christian”?

Either the word is only used by people who are trying to condemn atheism (but don’t have the arguments to do it) or everyone who has a strong opinion about anything is “militant.” And if it’s the latter, then the word loses all meaning.

There’s no such thing as a militant atheist. That’s just a derogatory phrase to describe people who have a passionate belief about something you don’t agree with.

Atheists who read books? Not even close to being in the same category.

August 20, 2016
Ark Encounter is Advertising by Giving Away Those Awful Christian Million Dollar Bills
Next Post

August 20, 2016 Will a Catholic Group Running Walgreens Clinics in Two States Impose Restrictions on Health Care?
Browse Our Archives
What Are Your Thoughts?leave a comment