Why is CNN Asking Presidential Candidates with Undeclared Faiths If They Believe in God? August 19, 2016 Bo Gardiner

Why is CNN Asking Presidential Candidates with Undeclared Faiths If They Believe in God?

“Do you believe in God?”

Since June, CNN has boxed into a corner three third-party candidates for President and Vice-President with this ridiculous question.

On June 22, the Libertarian Party representatives, Gary Johnson and William Weld, answered questions from CNN’s Chris Cuomo and selected voters in a CNN-hosted “town hall.” (The relevant portion begins at the 22:00 mark) 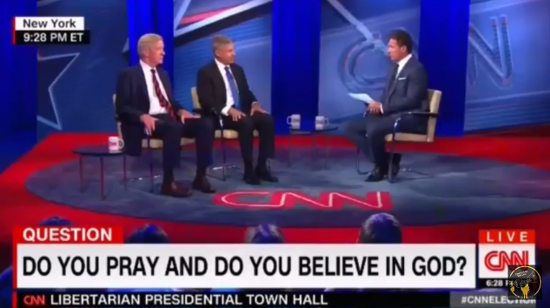 CNN selected Amanda Lindemann, an undecided voter from New York, to ask Johnson, “Do you pray and do you believe in God?”

Johnson didn’t appear interested in the question, but he offered the words he knew he had to say: “I have to admit to praying once in awhile and, yes, I do believe in God.”

Cuomo, clearly thinking she should have asked the vice-presidential candidate the same question, put the litmus test question to Weld: “Governor?”

Weld seemed even less interested in the question. But he, too, played the game: “Same on both. Same on both.”

Cuomo was unsatisfied and pushed Johnson harder: “What do you want people to know about you in terms of religion? I mean, is the answer ‘It’s none of your business’? Or do you go to church? Do you ascribe to a particular religious philosophy?”

Johnson responded, “I was raised a Christian, I do not attend church, and if there’s one thing that I’ve taken away from Christianity, ‘Do unto others as you would have others do unto you.'”

And then this from Cuomo: “Why don’t you go to church?”

Now, when I transcribe interviews I normally omit the “ums” and “uhs,” but I include them here since there’s a dramatic and uncomfortable increase in how often we hear them and the effect is marked.

Cuomo interrupted, trying to disguise his question with an attempt at humor: “I ask you as a suffering Catholic, you know? The question just comes up.”

Johnson was literally sputtering by this point: “I’m one of those that just, uh… I… I… the God, uh, that I speak to, uh, is not, uh, doesn’t have a particular religion.”

This week, CNN hosted a similar event for the Green Party candidates, Jill Stein and Ajamu Baraka. Cuomo was once again the moderator. (The relevant portion begins at the 33:49 mark.) 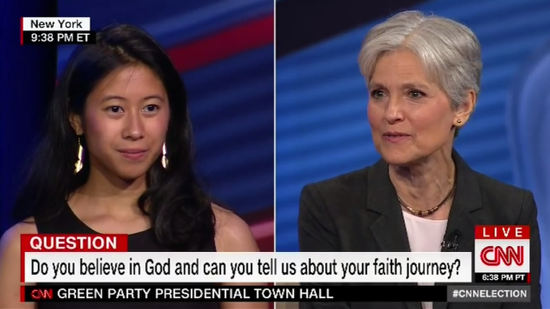 Jasmine Rebadavia, an undecided second grade teacher from New York City, asked Stein: “Do you currently believe in God, and could you tell us more about your personal journey in this area?”

Stein replied with her characteristic word salad, sprinkled with a much heavier-than-normal helping of “ums” and “uhs”:

Great. So I grew up a very religious person. I was probably the most religious person in my family, um, and I actually brought traditional Jewish ritual into my family, because I was so, um, uh, excited about what was going on in my reformed temple, where I sang in the choir.

Um, and certainly my view of the world, uh, I have to say, just grew out of the morality and the tales that I was learning, uh, from the Old Testament. Um, you know, now I am actually in a mixed, uh, family and uh, I am not, uh, actively practicing any religion, um, but I certainly have a very strong sense of our moral and human, uh, what shall we say, fiber? Something that is, um, spiritual, that is kind of beyond, um, our actual grasp, that inspires me and gives me great faith in other people? And our capacity, uh, to be, uh, more than the sum of our parts. Um, so I don’t fall into any particular religious box or conventional view, but I certainly carry on that spirit that, uh, inspired me way back when.

There absolutely are times when a candidate’s religious views are a matter of public interest. Candidates who signal that they hold specific religious beliefs that will substantially influence their decisions should be asked to explain what those beliefs are.  When George W. Bush consults the Book of Revelation for an invasion of Iraq, or Ted Cruz seeks advice from his Dominionist father who has theocratic goals, or Dr. Jill Stein’s New Age purity obsessions could lead to policies that harm the environment and public health, their religious beliefs are fair game for public scrutiny.

But simply asking whether a candidate believes in God is of zero consequence to national well-being and governance. It has only one purpose and one purpose alone: to subject a candidate to religious prejudice.

The candidates — and CNN — know perfectly well that this is the case. As researchers Scott Clifford and Ben Gaskins noted in their 2015 paper “Trust Me, I Believe in God: Candidate Religiousness as a Signal of Trustworthiness,”

… the use of religious and theistic references by U.S. presidents and candidates has risen dramatically over time… Americans are largely unwilling to vote for an atheist, and many do not believe that atheists can be moral… Poll after poll also reveals that atheism seems to be an unsurpassable barrier to holding public office… a large segment of the public is unwilling to support someone who does not believe in God as a presidential candidate and that this effect is strongly driven by the common belief that atheists cannot be moral… Studies have consistently shown that those who do not believe in God, that is, atheists, have long been one of the most disliked social groups in America…

We argue that politicians acknowledging their belief in God (often via religious language or public identification as a member of a religious group) goes beyond demonstrating national identity, transcends specific religious tradition, and is not limited to in-group cues. Instead, politicians’ religious identification reflects a powerful, widespread, but often subtle and unconscious bias in American society against those who do not believe in God. In other words, it is of vital importance for politicians to establish religiousness — that is, that they possess a necessary baseline of religious belief…

… we argue that Americans view those without theistic belief as fundamentally untrustworthy and immoral, and therefore, politicians use religious cues to establish trust from the average American voter and to establish their basic worthiness for political office.

There’s good reason why every President except one who had a public inauguration ceremony chose to be sworn in with a Bible.

That’s almost certainly why Bernie Sanders chose to pander to the religious by lamely defining God as the belief that “all of us are connected” so that he can give the “correct” answer that he’s a believer even if it’s a very untraditional kind of belief. It’s likely why Rep. Kyrsten Sinema (D-AZ), the only current member of Congress who officially describes her religious affiliation as “None,” fought back against those who labeled her an atheist by treating it like a dirty word. Her press office issued a bigoted statement that “the terms non-theist, atheist or nonbeliever are not befitting of her life’s work or personal character.”

If you’re trying to win over a broad swath of the American public, that sort of pandering may make sense to the coldly calculating.

But why would independent, third-party, and non-religious politicians who largely aren’t even seeking conservative Christian votes willingly participate in this game?

Clifford and Gaskins looked at the numbers and concluded:

… signaling religiousness can be a powerful tactic for candidates to improve perceptions of their trustworthiness and morality and to increase their vote share, even for Democratic politicians… For Democrats, however, displays of religiousness can serve to expand their appeal among moderates and conservatives without significantly endangering support from liberal voters. While secular liberal voters may not be happy with Democratic politicians using religious rhetoric, it is highly unlikely that they would punish those politicians by defecting to the Republicans, especially in the current political-religious climate…

It may be argued that Democrats use religious rhetoric simply because they are religious themselves, thus such rhetoric would not be neither puzzling nor merely the result of political pandering… While it is undoubtedly true that Democratic politicians — along with most American politicians — are often highly religious themselves, this raises a different question: Why do politicians so disproportionately identify as religious, compared with the overall public and especially the Democratic base? According to a June 2014 Gallup poll, 30% of Americans are identified as “nonreligious,” and these voters favor the Democratic Party by a margin of 52% to 29%. Despite this, essentially no national politicians, even Democratic politicians, identify as secular…

As for the proven fallacious myth that belief in God makes you a better person, these political analyses suggest it can be the opposite by breeding unfounded religious intolerance:

Underlying CNN’s religious interrogations is the inescapable fact that anti-atheist bigotry is one of the last bigotries that remains socially acceptable in America.

This is why even liberal politicians who eschew all other bigotries are willing to feed into false beliefs about and intolerance of atheists:

[Our study found that] the large number of respondents that were openly prejudiced toward atheists speaks to the social acceptability of this type of prejudice, and how it would be beneficial for a politician to create the perception that he or she believes in some higher power.

It’s unethical for a political candidate to deliberately participate in the sustaining of a bigotry or intolerance by pandering to a privileged majority. There comes a time in each equality movement when politicians must show moral backbone. They accomplish this best not by stepping out alone, but by actively building the caucuses and the support they need so they’re less vulnerable.  Given the rise of the Nones, the decline in atheist prejudice, and the success of atheist politicians in Europe, non-believing American politicians are morally obligated to begin that process now.

And if they don’t feel a moral obligation to do it, there’s a selfish reason, too. The percentage of non-religious Americans continues to grow and that means a lot of votes are up for grabs to the Party that courts them best.

I would add that it’s also unethical for the media — CNN, in this case — to pressure political candidates into choosing between political suicide or pandering to bigotry, when no information of national consequence is to be gained.

Our constitutional ban on religious tests for public office is worth less to the non-religious than the sheepskin parchment it was written on was worth to the sheep.

August 19, 2016 A New York Church Had Its Tax Exemption Rightfully Revoked, and It's Suing to Get It Back
Browse Our Archives
What Are Your Thoughts?leave a comment