Irish Politician: The “Fact” of Noah’s Ark Proves We Don’t Need to Worry About Climate Change

Danny Healy-Rae, an Irish politician who took office earlier this year, says in a new interview that the “fact” of Noah’s Ark confirms that climate change isn’t really a problem. 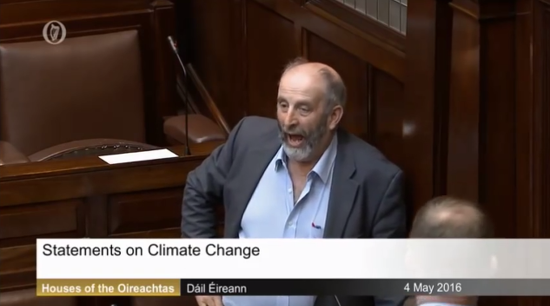 Earlier this year, Healy-Rae denied that humans had any impact on climate change because, as he explains in the video above, God controls the weather.

The magazine Hot Press decided to follow up on those statements.

Asked by [reporter] Jason O’Toole whether he felt criticism of his views was unfair, [Healy-Rae] replies: “Everyone is entitled to their view. I’m basing my views on facts. The facts are there and history proves it. We had the Ice Age. We had Noah’s Ark. We had all those stories. We’ve proof of the Famine in 1740, which was caused by two years of incessant rain.

In the real world, facts aren’t supposed to be up for debate. But when you’re a biblical literalist, your standard of evidence rises no higher than someone telling you “God did it.”

It may get you a publishing credit in Ken Ham‘s Creationist research journal, but it makes for disastrous public policy for the people of Ireland.

Before you mock him, just remember: In the U.S., we have a presidential candidate who is also a climate denier. Moreover, his party’s platform states that climate change isn’t really a big deal.

This guy’s a kook in his country. He’s part of the establishment in ours.

(Thanks to @floyd_spooner for the link)

August 18, 2016 An Oregon Priest Wants to Destroy a Gun He Won in a Raffle, but His Plan May Backfire
Browse Our Archives
What Are Your Thoughts?leave a comment