At an Arkansas Tea Party conference last weekend, Christian pseudo-historian David Barton said that you don’t find any atheists in the rural parts of America because, if we lived in the country, we would totally believe in God since evidence of His creation would be all around us. 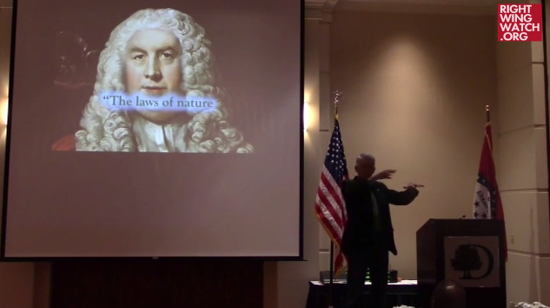 It’s a strange statement for a number of reasons, the least of which is that we know atheists exist everywhere. If there are atheists in Saudi Arabia, I promise you it wouldn’t be that hard to find them on a farm.

Hell, you’d expect to find some atheists in rural areas given how much science is involved in agriculture and raising animals.

Barton is also suggesting that evidence of God doesn’t exist in big cities. I guess the diversity of people, and the incredible architecture, and the beautiful lakefronts don’t count. If I were a pastor, it would be easy to point to examples of God’s Creation in the city. Barton seems to think God limits himself to farmland and animals and open skies… which is an odd thing to hear from a cheerleader for Christ.

Barton made a similar claim in 2014, and I’ll paraphrase what I said then: If there are more religious people in the countryside, one reason for that could be that when you’re more isolated from the world, as farmers tend to be, you’re much less likely to encounter people whose different ideas may challenge you and cause you to change your mind.

In the city, you come face to face with other opinions all the time. You live and work with people who disagree with you. It’s a lot harder to be anti-gay in an urban area, for example, because you’ll inevitably meet and know gay people and realize there’s nothing to worry about.

But none of that suggests you won’t find devout Christians in big cities or atheists in the country.