When I went to see the film Sausage Party, I braced myself for a 90-minute dick joke. What I didn’t realize from the previews was that the subplot was all about something equally primitive in nature: God. The whole movie is a long discussion about religion.

Though it’s unlikely this film will be seen by those who find the unexpected Allegory of the Cave plot enlightening, due to the proudly R-rated language and graphic sexual imagery, this atheist found the storyline to be amusingly familiar and far more substantive than expected. 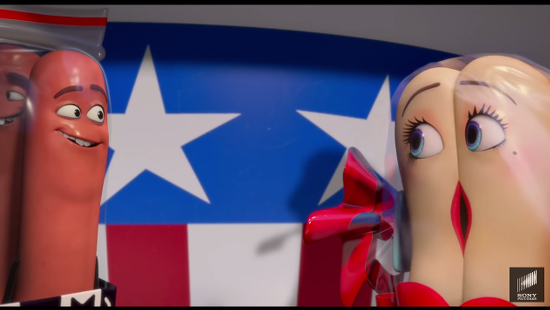 The film opens with a song of praise to the gods, joined by every item in the grocery store. Each food item, representing various parts of the world, sing together harmoniously, tailoring the lyrics to suit their respective regional deities. It’s very clear they have disagreements. The food from the American South belts out, “Everyone else is fucking stupid, except those who think like me…”

The story focuses on two lovers, a sausage named Frank (Seth Rogen), and his counterpart, a bun named Brenda (Kristen Wiig). Frank and Brenda are eager to consummate their relationship but, fearing God’s wrath, they must abstain until they’ve been selected and taken to The Great Beyond — that is, the land of eternal bliss that lies outside the grocery store walls.

The religious references are scattered throughout the film. Food items that have gone past their sold-by dates are plucked off the shelves and disposed of in a deep, dark rubbish bin, never getting to see The Great Beyond — while the fresher foods witness it all with sympathy, reassuring themselves that God works in mysterious ways and they shouldn’t be questioning His wisdom.

In another situation, a customer returns mustard he bought because it wasn’t the right kind. Having witnessed the horrors and carnage that exist in the Great Beyond, the jar of mustard is shaken, belligerently warning his fellow foods of what awaits them. Much like in Plato’s allegory, he is assumed mad and summarily dismissed.

When a disastrous clash leads some of the foods to escape their packaging, their own trip to the Great Beyond is thwarted and they must find a way to live and work together. Reluctant to “co-exist” at first, some of them who have religious disagreements choose to reunite with their shelf-mates — including a dark-bearded piece of flatbread with ambitions of making it to The Great Beyond to collect his 77 bottles of extra virgin olive oil. (The stereotyping was heavy, but at least it extended across the board, leaving no nationality un-mocked.)

Frank’s own doubts begin to grow after his run-in with the mustard jar. Each time he tries to return to the sausage shelf, in an attempt to get to The Great Beyond, he’s derailed, dragging the team into dangerous situations. It all puts a strain on his relationship with Brenda, a blind-faith believer, who questions if her and Frank touching “just the tips” is the sin that is to blame for their recent troubles.

Frank’s quest eventually leads him to the non-perishables — Firewater, a Twinkie, and a box of grits — who confess that The Great Beyond was invented by them as the opiate of the masses. Before they created it, life on the shelf was dark and chaotic for those preparing to die a brutal death by the teeth of humans. God was introduced to settle the unrest. And it worked!… although different aisles began accepting varying versions of the story, causing a new form of strife.

It isn’t until one of Frank’s old sausage package-mates, Barry, returns to the store that the truth is finally revealed: they are all going to be eaten. Frank, the New Atheist in disguise, warns the food via intercom that they’re all wrong about The Great Beyond.

The response? “It’s just a theory,” some say. The other foods even criticize his approach: “You just called them all a bunch of idiots.” (Where have we heard that before?)

It’s unclear why the movie wasn’t marketed for its religious themes. It’s possible Columbia Pictures didn’t think it would do as well if it were revealed to have this depth. It speaks to the state of our culture that dick jokes turn away fewer people than religious questioning, however delicate and humorous the attempts may be.

To be clear, Sausage Party was not anti-religious. Rather, it showed how stubborn and petty religious thought can be, hampering our abilities to fearlessly enjoy life in the moment. If any religious people saw the film, they’re likely saying to themselves, “That doesn’t represent my faith.”

But if you’re an atheist who likes this sort of raunchy humor, you’re also going to appreciate the philosophical story that underlies this film.

Who knew a profane sausage could be a mascot for the godless?

August 16, 2016
A Science Vlogger Explains the Neat Genetic Differences Between Nectarines and Peaches
Next Post