Bryan Fischer Claims Hillary Clinton is “Motivated by the Spirit of the Antichrist” August 16, 2016 Hemant Mehta

One of the least talked about aspects of this election is the fact that neither candidate seems to care much to appeal to the Religious Right. Hillary Clinton by and large supports separation of church and state and doesn’t spend much time talking about her Methodist faith. Donald Trump, despite trying to appeal to the conservative religious base, is the worst panderer we’ve seen in a long time. Even the Right knows he doesn’t really care much about religion; he sure as hell doesn’t emulate Jesus in anything he does.

So what do you do if you’re a conservative and it’s sinking in that Clinton’s going to win the election, turn the Supreme Court leftward, and push abortion rights forward?

If you’re American Family Radio host Bryan Fischer, you cite the Bible as to why Clinton shouldn’t be President: “… you could make a pretty good biblical case… that only men are supposed to hold political office.”

And when that fails, you just say she’s “motivated by the spirit of the Antichrist.” 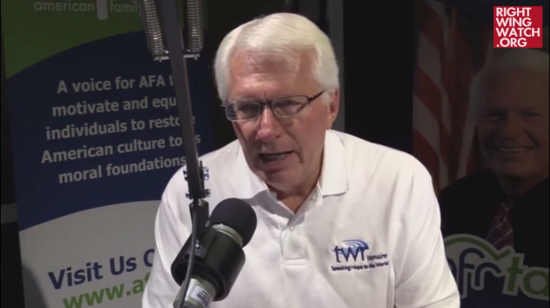 Mostly, she’s against all the bigotry, government-sanctioned Christianity, and bodily control the Religious Right wants. If the Antichrist is leading her in that direction, then I know who I’m voting for in 2024.

What’s ironic is that Clinton is the more “religious” of the two ostensibly Christian candidates. She’s the one who stayed married when she could have filed for divorce. She’s the one who brings up her faith unprompted during interviews. She’s the one whose policies would most benefit struggling Americans. You can say it’s all part of a political game, but it’s a game Trump doesn’t know how to play.

Meanwhile, Trump can’t decide whether or not he supports LGBT rights. He doesn’t understand abortion issues. He wants to split apart families. He makes religious gaffe after religious gaffe.

But if you don’t want to bring any of that up, I guess claiming Clinton is controlled by the devil is a solid Plan B.