Back in April, Tim Jeffries, the head of the Arizona Department of Economic Security (DES), sent an odd email to the 7,000 people in his office. He announced that he and his wife were members of a Catholic group known as the Order of Malta and they were planning to visit Lourdes, France. Specifically, they were going to a Grotto where the Virgin Mary had supposedly been spotted multiple times. And he made an offer to his employees: 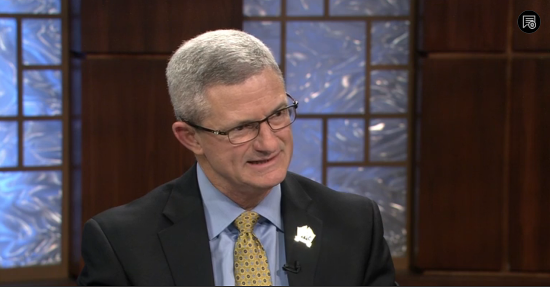 In other words, send him your prayers and he would deliver them in person to France, which is where I guess Jesus picks up his mail.

It wasn’t malicious. His heart’s obviously in the right place. But let’s admit this was really no different than announcing a meeting of his personal Bible Study, or signing off on his work emails with a Bible verse.

It wasn’t just personal, either. Jeffries told people who sent him prayers that, “My special assistant Nicole Lewis is tracking all of them, and will make absolutely certain that I hand carry them to Southern France.” Which sounds like he’s using a government employee to conduct his religious business. And was he going to use government resources to print out these 200 prayer requests he received?

New Times asked Jeffries if he used state resources to print out the 200 letters, and if Nicole Lewis is a DES employee. He replied, “I print petitions at Casa Jeffries in Scottsdale where I keep the special intentions in my family chapel prior to venturing to Lourdes.”

He added, “Nicole Lewis is a trusted colleague and DES employee. She serves as my project specialist (aka special assistant) focused on colleague engagement, collaboration, and assistance. Among her many key duties, she ensures that I never miss a colleague’s request for help of any kind.”

Still, the head of a government office was using his work email to announce his personal religious views and inviting others to send him their prayers. If a Muslim did something similar — or an atheist — it would be a career-ending mistake.

The Secular Coalition for Arizona even called him out on it:

The state’s employee handbook says that, “Any use of State property for other than State-business purposes must be exercised in accordance with your agency’s policies and procedures,” Quintana said, adding that Jeffries’ “dissemination of personal religious beliefs is not considered legitimate State business.”

The Freedom From Religion Foundation sent him a letter, too.

“It is unconstitutional to use DES staff and resources to promote your personal religious views,” the foundation wrote Jeffries in a June 24 letter. “We request that you immediately cease promoting religion through DES email and do not involve DES employees in any future religious trips you take.”

Further, the state’s Standards of Conduct prohibit state employees from performing an act in “a private capacity that may be construed to be an official act.”

This week, the office of Arizona Attorney General Mark Brnovich announced that they had looked into this matter and concluded that — surprise! — everything was perfectly fine and Jeffries did nothing wrong:

… in an Aug. 10 response, attorney general Civil Division Chief Counsel Paul Watkins concluded Jeffries’ assistant “likely should not have collected special intentions” from his employees. However, the attorney concluded, Jeffries’ communications were “private speech, did not bear the endorsement of the State, and did not violate the Constitution.”

“Mr. Jeffries’ email is plainly personal,” Watkins wrote [to FFRF]. “As you acknowledge, Mr. Jeffries was planning a personal trip. He talked about his personal involvement in a group conducting a charitable endeavor to help people with serious illnesses. He offered to personally take notes from employees on his trip.

“And he stated that employees should only give him notes if they are ‘comfortable’ with doing so,” Watkins continued. “At no time did Mr. Jeffries state that DES is sponsoring or endorsing his emails, his trip, or his beliefs.”

By that logic, Jeffries could send emails to his staff every day preaching Catholicism and he would still be let off the hook because it’s all “personal” despite his using government resources to do it.

I worked at a public school for years and any teachers who used the staff listserv to promote their political or religious views were appropriately punished. And you’d never see an administrator doing something like that.

But when the head of Arizona’s DES does it, it’s perfectly fine. That’s how good it is to be a Christian.

On Saturday, Jeffries sent another letter to his staff of 7,000 addressing this whole controversy. (The email was forwarded to me by someone in the know.) And it included a message for his “haters”:

From: Jeffries, Timothy
Sent: Saturday, August 13, 2016 7:32 AM
To: *All DES Employees
Subject: Regarding this Week
Dear Colleagues in Our Great DES,

As you know, it is always a busy week for me, particularly because I love engaging you and serving you so passionately. The press interest and coverage of my ardent and unflinching love for Faith, Family, DES, Arizona, America and Freedom remain interesting, fascinating, humbling and a bit exhausting for me. The exhilarating part of all this continues to be your amazing support, encouragement, kindness and love. I received well over 200 emails from you yesterday during my wonderful travels to the Navajo and Hopi Nations. I also saw all of the colleague-generated activity on social media. Thank you for this. Thank you so very much. Yesterday was yet another beautiful day for me in service to you. I am in your debt.

To the Haters in Our Great DES,

Your ongoing distrust, dislike and discounting of the beautiful things in play at our great and noble agency weigh very heavy on my heart. We can humbly disagree on my ardent and unflinching love for Faith, Family, DES, Arizona, America and Freedom​. However, hopefully (though I’d prefer surely) we can agree that our agency has come a long way in the 530 days that I have passionately served as your servant leader director. I fully understand that we have a long, long, long way to go. My predecessors left us several megatons of things to do after 43 years of decent intentions and bureaucratic minimalism. I also fully understand and accept that this is a grand secular venture of our state. Yet, it is my constitutional right to say that I believe this is also the Good Lord’s Work. I am very sorry this vexes some of you. I hope and will pray that someday you will see that my personal foundation and 24×7 frame of reference are what fuel my 70+ hour work weeks. I do NOT expect NOR would I ever expect that my personal views would alter yours. I simply ask you to respect my deeply-held views, including my constitutional rights, as much as I respect that you may differ on this. I am not sure nor do I care if there are 5, 10, 25, 50 or 100 of you who gripe and grumble about these quintessentially America things. I only care that we work as a team rooted in our agency values with a desire for goodness to befall all of us. As I am immensely happy that Our Great DES blesses you, I would hope you would also be happy for me. In fact, I also hope you will cease your covert attacks, and simply engage me directly so we can learn from each other. Many others have done this. The conversations, the give and take, the back and forth have been awesome. Take a leap like others, and reach out to me.

To Everyone in Our Great DES,

I fully support and often celebrate our vast differences on any number of grand and important things. It is our Diversity in Our TRIAD Values that help fuel our greateness. Alas, we are a wonderful reflection of whom we serve and those who funds us in Arizona. We are truly Arizona in action. TRUST ME, I am actually grateful everyone is different than me. If everyone were just like me that would be exhausting. Heck, I know just one of me is a bunch to take already. 🙂

So, let me remind everyone again that as your servant leader director, I care about you deeply and love you and your families in the way I believe I am made to love. As it pertains to our noble and consequential work, I only ask that everyone do their job well and honor Our TRIAD Values everyday. We are privileged to work for Our Great DES and every day we must earn the privilege to serve another day. No one, myself included, is entitled to work at our great agency. We must earn the right to work for our agency. Subsequently, as you diligently earn the right to work for Arizona DES, you are entitled to the great treatment that we are incessantly laboring to provide you. Hopefully, this makes perfect sense to you. If not, reach out to me, and I will schedule time with you.

In closing, I care for you and I love you regardless of where you may be in our agency, your life and whatever beliefs or non-beliefs you may hold. We are privileged to work for Our Great DES, and it remains one of my life’s greatest privileges to serve you. Although I have never been more spent on a daily basis, I have also never been so happy so consistently so joyfully my entire life. I have ALL OF YOU to thank for this, and that includes those whom I obviously vex. I wish you a wonderful, restful and blessed weekend.

“Ditat Deus” — or “God enriches” — is the state motto. Convenient, that.

It’s disturbing how someone in charge of such an important government office has no appreciation for the fact that he crossed a line. He thinks using his state email to spread his faith — or talk about it in any way — is appropriate when it’s not.

It’s also not the only way Jeffries pushes his faith into the work he does. Check out this Powerpoint presentation he gave his staff recently. Besides the quotations from Catholic luminaries sprinkled throughout the presentation, there’s also a slide labeled “The 7 Tenets of Catholic Social Teaching,” an “inspirational” line about how “We were born to make manifest the glory of God that is within us,” and another shout-out to the religious motto.

Jeffries doesn’t understand the Establishment Clause. He doesn’t know or doesn’t care that church and state should be kept separate. And he’s able to get away with it because he happens to be in the majority faith.

There’s no excuse for this and, again, this would be obvious if we were talking about someone who wasn’t Christian. It’s irrelevant if he’s a nice guy or if he means well. Jeffries needs to follow the law or find a new line of work.