A New George Carlin Album Will Be Out Next Month, Eight Years After His Death August 16, 2016 Hemant Mehta

A New George Carlin Album Will Be Out Next Month, Eight Years After His Death

George Carlin recorded his special Complaints and Grievances on November 17, 2001. As with all of his albums, he had been working on the material for much of the previous year, testing out various permutations of the jokes on the road leading up to the big event. And a bit called “I Kinda Like It When a Lot of People Die” ended up on the cutting room floor after September 11 for obvious reasons. (That was also going to be the title of the special before the tragedy.) 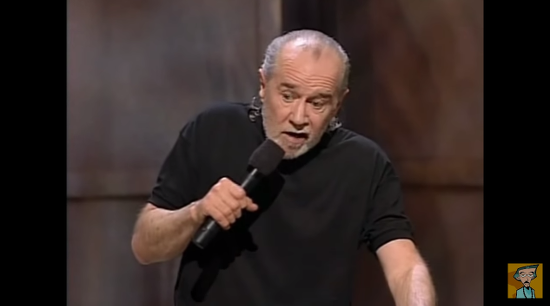 That routine, in which Carlin discussed his joy in witnessing disasters likes famines and tornadoes, along with never-before-heard interviews and comedy bits, will be released by his estate next month as part of a new album (using that same original title).

You can hear some of the controversial bit below — the recording was made on the day before 9/11. It becomes apparent rather quickly why Carlin decided not to include this routine when he recorded his special:

You know what my favorite disaster would be? And, Jesus, I pray for one of these… An asteroid. A big fucking asteroid… I’m talking about a big hunk of rock the size of Minnesota… streaming through the atmosphere and smashing right into… Minnesota! What the fuck. You can never have too many dead people. And I don’t care who gets killed. I don’t care who it is. As long as it’s not me…

I Kinda Like It When a Lot of People Die is available for pre-order now. It’ll be released on September 16.

August 16, 2016
Bryan Fischer Claims Hillary Clinton is "Motivated by the Spirit of the Antichrist"
Next Post