If there’s anything we’ve learned from satirical French magazine Charlie Hebdo, it’s that the people who work there aren’t going to stop poking fun at bad ideas even when threatened with violence. They didn’t stop after nearly a dozen staffers were killed in a January 2015 massacre, and they’re not going to stop now.

But the threats are still coming, especially after the magazine’s latest cover: 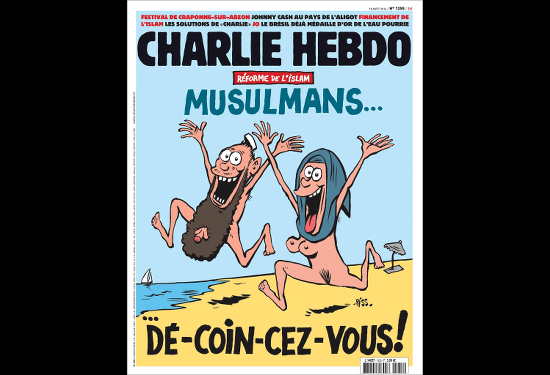 Commenting on the decision to ban burkas from beaches in Cannes, the latest issue depicts a man and woman with a traditional beard and hijab running naked on the beach with the caption “The reform of Islam: Muslims loosen up”.

The issue was published on Wednesday and the staff received a threat that a new attack was imminent via the magazine’s Facebook page, Le Parisien reported.

The cover, as the article notes, is a reaction to Cannes Mayor David Lisnard banning full-body swimsuits known as burkinis from the city’s beaches.

… Lisnard cited [the Nice] tragedy and subsequent attack on a northwest France church in an ordinance forbidding swimwear that doesn’t respect “good morals and secularism.”

“Beachwear manifesting religious affiliation in an ostentatious way, while France and its religious sites are currently the target of terrorist attacks, could create the risk of disturbances to public order,” the ruling says.

The Mayor is, in my opinion, defending a ban that will only make the French relationship with Muslims worse. By telling Muslim women they can’t wear a full-body swimsuit, they’re also sending the message that certain kinds of peaceful Muslims can’t enjoy the city’s beaches. After all, a man wearing a giant cross necklace — which is also “manifesting religious affiliation in an ostentatious way” — probably doesn’t have to worry about being kicked out. A better response would have been to improve the security at tourist attractions like the French Riviera, not single out a particular religion.

Charlie Hebdo‘s cover mocks Lisnard’s response, as if his ban will suddenly lead to Muslims taking it all off. (Or close to it, anyway.)

But that’s a separate issue. This debate is simply over whether Charlie Hebdo should be allowed to satirize, mock, or depict people in an unflattering way without feeling like their lives are in danger. Even if you think they often go too far, there’s no excuse for saying they don’t have the right to do it.

(Update: After feedback, I’ve corrected the interpretation of the cover, adding a bit about the magazine’s intentions. My apologies for any confusion.)

August 15, 2016
Newspaper: Praying Football Coach's Lawsuit Against District Is "Waste of Time and Resources"
Next Post