The Netflix series Last Chance U is all about the players on the East Mississippi Community College football team, some of whom were kicked out of their elite Division I programs or didn’t have the grades to compete at that level. The show has received really positive reviews since it became available a couple of weeks ago.

In addition to the uplifting stories, however, there’s another side of the story that got very little coverage: This is a football team where coaches pray with students and push the Bible, acts that might seem inspirational but still violate the law: 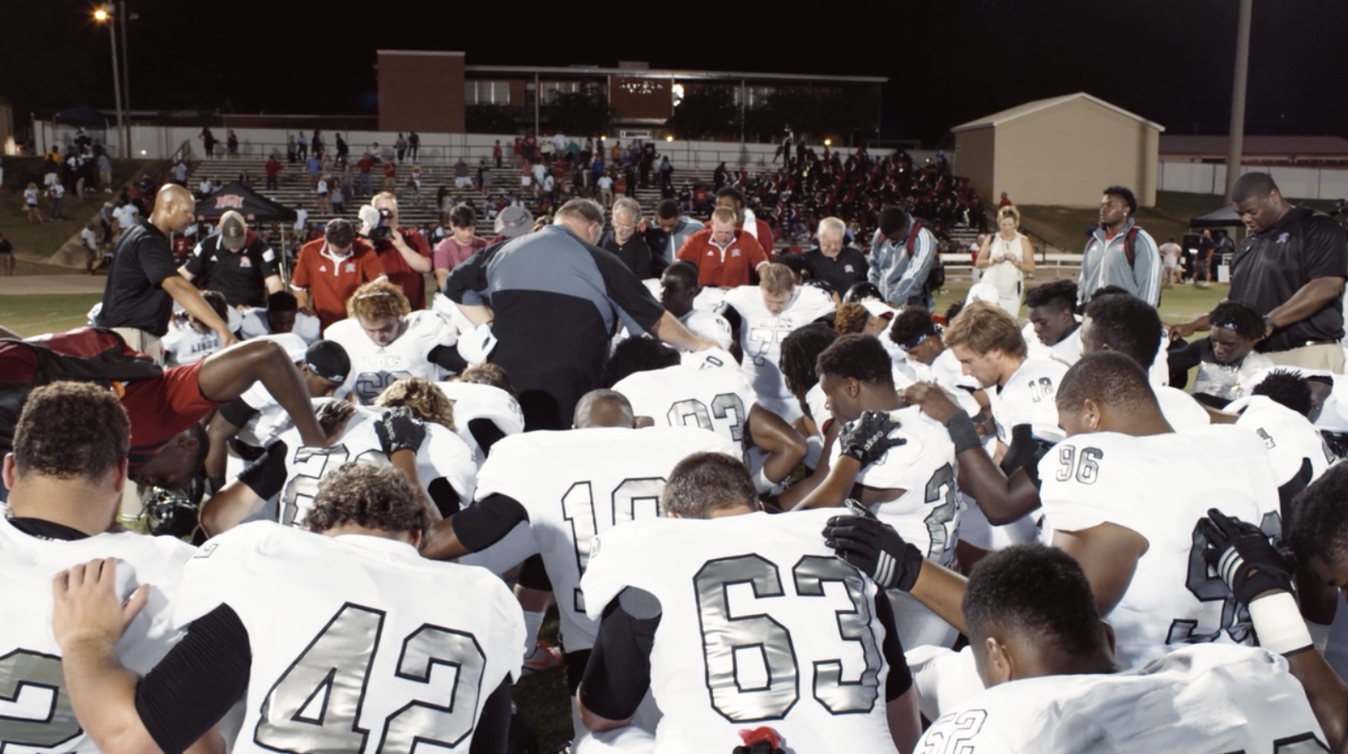 The Freedom From Religion Foundation explains:

Religious endorsement is endemic within the football program. Head Coach Buddy Stephens regularly leads his players in the Lord’s Prayer. He prefaces the prayer with “everybody touch somebody,” and then the whole team and coaching staff recites the prayer. This occurs in several episodes during the series. Stephens has said of faith: “It is the foundation of our program. We start our practices with prayer [and] end our practices with prayer.”

In one episode, Assistant Coach Marcus Wood leads a prayer before a game that says, “Dear God, Thank you for these guys, the way they’ve worked. Thank you for all of our blessings. Help us to play this game in a violent and vicious manner and play it the way it’s supposed to be played.” He also apparently leads a weekly bible study for the players. An episode of “Last Chance U” begins with him holding what seems to be a bible while discussing a verse from the Book of Job. In another episode, he says, “Maybe my job is to talk to you a little bit every week about the bible.”

FFRF sent a letter to the school’s President, Thomas Huebner, calling for an end to the religious proselytizing:

“Any public institution in this day and age has to be mindful of the diversity of belief among its students,” says FFRF Co-President Annie Laurie Gaylor. “It is unconscionable for East Mississippi Community College to act as if its entire football team is made up of devout Christians.”

For all the amazing things the coaching staff accomplishes to help these students, it’s unfortunate that Christianity is the glue they believe binds everyone together. They can continue their success without forcing Jesus on everyone.

August 13, 2016
Bryan Fischer: "I Don't Believe That Women Should Be Entrusted with High Political Office"
Next Post

August 13, 2016 Christian School President's Email Devotional Discusses Whether He Can Still Say the Word "Pervert"
"Thanks! Good story.I searched for "poll workers" instead of "poll watchers" and for "msn.com", so ..."
wannabe This Group Uses Christianity as Justification ..."
"You are aware that Trump is a British euphemism for fart? Well, so is Poot ..."
Steampunk Gentleman The New Leader of a Major ..."
"And when you know you’re descended from enslaved people whose history was ripped from them ..."
San_Ban Anti-Racism Activist Rev. Rob Lee IV ..."
"The implicit assumption (likely correct) is that the female BIPOC ancestor was raped."
San_Ban Anti-Racism Activist Rev. Rob Lee IV ..."
Browse Our Archives
What Are Your Thoughts?leave a comment