You would think any email from a college president to school alumni would include the recent accomplishments of faculty members and students. Or maybe a mention of upcoming events. Even in a devotional email from a Christian college president, you’d expect something positive and uplifting.

But Dr. D. Clay Perkins, President of Mid-Atlantic Christian University, took a very different approach in a message he sent out yesterday. (A graduate of the school forwarded it to me.) 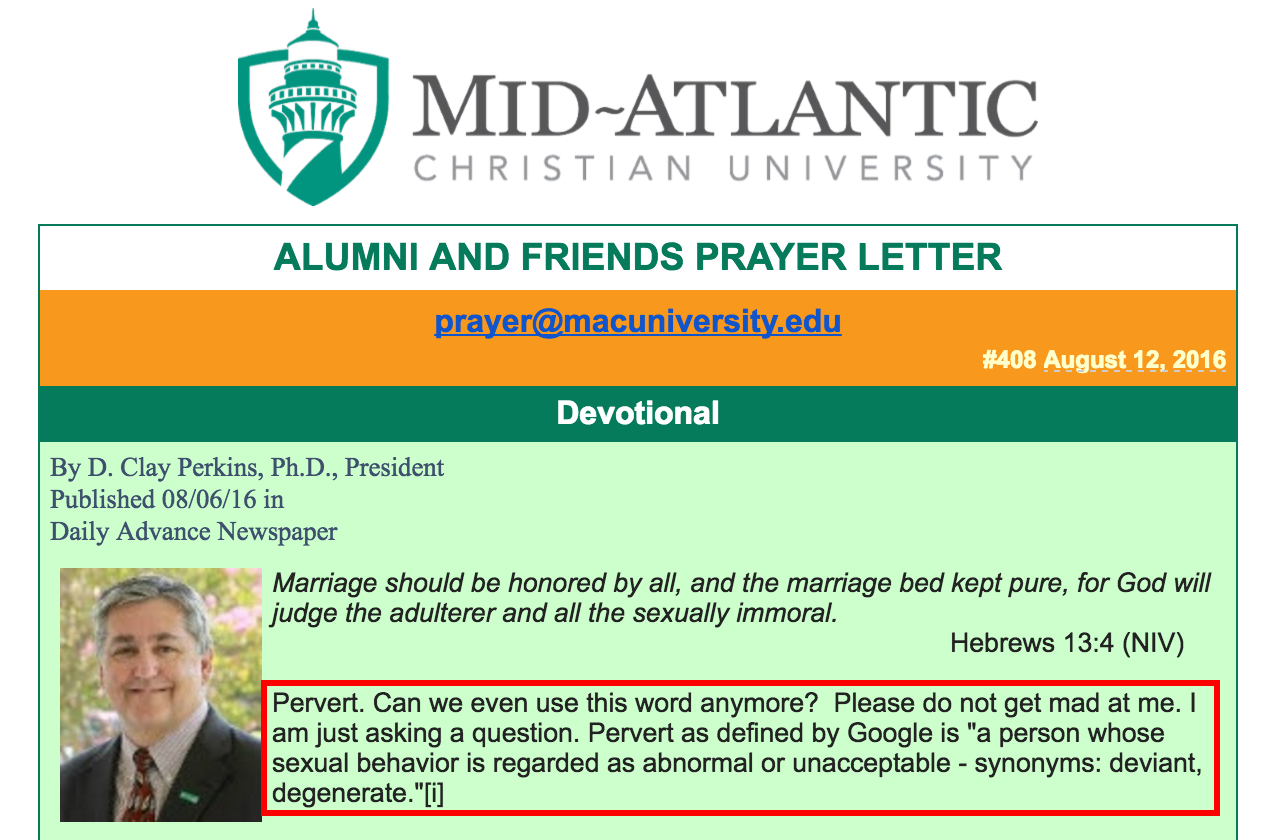 Pervert. Can we even use this word anymore? Please do not get mad at me. I am just asking a question. Pervert as defined by Google is “a person whose sexual behavior is regarded as abnormal or unacceptable — synonyms: deviant, degenerate.”

2) You know exactly where he’s going with this because Christians like him are bigots who assume everyone who doesn’t fit a particular traditional mold is inherently doing something immoral.

3) Did a university president seriously sit at his desk and Google the word “pervert”? Because I’m pretty sure that’s what happened.

And that’s just the first paragraph. You can read his entire email, published earlier in a local newspaper, right here.

Really makes you want to whip out that checkbook and make a donation, doesn’t it?

August 13, 2016 Some Parents Refuse to Give Their Newborns a Necessary Vitamin K Shot for Irrational Reasons
"Sack the script writer."
Philip Buczko Called Out for Anti-Semitic Stereotypes, TV ..."
"And that was one of the reasons the age was lowered to 18. Because of ..."
phatkhat MAGA Cultist: “I’ll Admit It. I ..."
""metal band"I always preferred "a ring through the nose" myself. Less opportunity for confusion."
Mike Meredith Judge Tosses Lawsuit Saying Divorce Violates ..."
"I wished you would have been around when I was school, because the majority of ..."
Pattyrealdeal After Baptist Pastor Tells Wives to Lose ..."
Browse Our Archives
What Are Your Thoughts?leave a comment