Bryan Fischer: “I Don’t Believe That Women Should Be Entrusted with High Political Office”

What do you do if you’re a conservative Christian watching Donald Trump‘s nosedive in the polls? It has to be depressing to see the country turning blue much faster than the shifting demographics even suggested, in large part due to the disaster at the top of the ticket. Forget overturning marriage equality. Forget passing draconian anti-abortion measures. Forget the Supreme Court. You can’t even make a compelling case for Trump because you know he’ll say or do something — probably within a matter of hours — to negate it.

That’s why American Family Radio’s Bryan Fischer took a different approach, telling his audience it would be courageous for a prominent individual to say he would never vote for Hillary Clinton because he doesn’t believe “that women should be entrusted with high political office.” 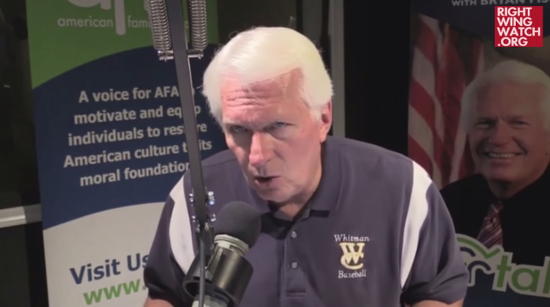 Responding to a caller, Fischer stated that “you could make a pretty good biblical case … that only men are supposed to hold political office.”

“I think you could make a good case that leadership in culture, society, politically as well as in the home, that that is something in God’s economy that’s reserved for men,” Fischer stated. “What if somebody had the courage to go on national TV, somebody of some kind of prominence or visibility, and said, ‘Look, I’m going to vote for Trump because he’s a man. I don’t believe that women should be entrusted with high political office‘ … That’s the position I happen to take.”

I don’t remember conservative Christians feeling that way when Sarah Palin was running for Vice President in 2008… but hypocrisy never seems to bother Fischer and his allies.

On a side note, I’ve heard a lot of Third Party supporters claim — lazily, I might add — that Democrats aren’t giving them good reasons to vote for Clinton; they’re only hearing reasons to vote against Trump.

Here’s the flip side of that: A conservative who wants people to support Trump for no other reason than his opponent has a vagina.