Christian Speaker Opposes “In God We Trust” Resolution, Saying “It Is a Waste of Time” August 12, 2016 Hemant Mehta

Christian Speaker Opposes “In God We Trust” Resolution, Saying “It Is a Waste of Time”

When government officials want to promote the phrase “In God We Trust,” we know there’s little anyone can do to fight it. Because even though it’s clearly promoting God, it’s also the U.S. motto. Loophole complete. 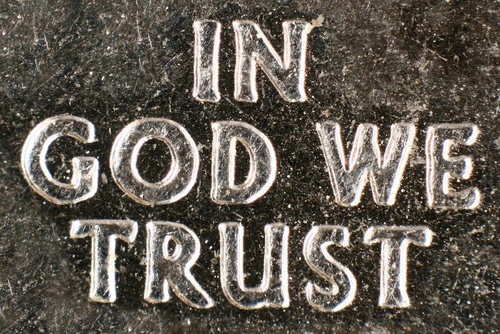 But you have to appreciate anyone who has the courage to point that out, especially when that person is in the minority. That’s what happened this week in Illinois where the Kane County Board considered a resolution stating that it reaffirms the godly phrase and “supports and encourages the public display of the National Motto throughout” the area.

During the public comments part of the meeting, however, former Board member Bonnie Kunkle spoke out against the resolution:

The resolution reaffirming the motto had “nothing to do with county business,” she said. “It is a waste of time.”

“I come before you as a person of faith,” Kunkle said. “I am a Christian. I do not want to promote discomfort or disrespect for people because that is not in keeping with my God. My God is bigger than a motto or coin or country and my God does not need this resolution.“

That’s a fantastic point to make, all the more powerful coming from a religious ally of church/state separation.

Little did she know her God is very insecure and needs all the affirmation He can get. The resolution eventually passed 21-1.

(Image via Shutterstock. Thanks to E for the link)

August 12, 2016
The Secular Student Alliance's Executive Director Will Be Stepping Down After an Incredible Run
Next Post