In an open letter to President Obama, 15 doctors who are volunteering in Aleppo (Syria) are asking for serious support from the U.S. government. They specifically reject calls for more prayer, urging Obama to assist with action instead. 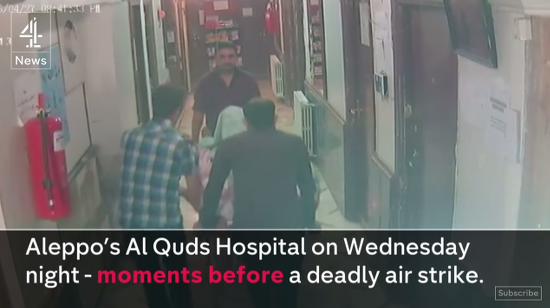 Continued US inaction to protect the civilians of Syria means that our plight is being wilfully [sic] tolerated by those in the international corridors of power. The burden of responsibility for the crimes of the Syrian government and its Russian ally must therefore be shared by those, including the United States, who allow them to continue.

We do not need tears or sympathy or even prayers, we need your action. Prove that you are the friend of Syrians.

The White House has acknowledged seeing the open letter, with a spokesperson saying that

“The U.S. has repeatedly condemned indiscriminate bombing of medical facilities by the Assad regime in Aleppo and elsewhere in Syria.”

“These attacks are appalling and must cease,” the official continued. “We commend the bravery of medical professionals across Syria who are working every day in perilous circumstances with minimal supplies to save lives.”

The official said the US government is working with the United Nations and engaging with Russia to find a diplomatic approach to reducing the violence and allowing humanitarian assistance into the city.

What the doctors are doing is both generous and dangerous. You have to admire the fact that they’re putting their own lives at risk to help strangers in a land ruled by a tyrant. Surely they know that simply announcing their presence will paint a target on their backs. That’s why the U.S. must do everything in our power to assist them and protect the 300,000 people still living in that region. If we don’t lead the way, who will?

And that means not just keeping them in your thoughts but providing tangible relief instead.

August 11, 2016 New Jersey Mayor Approves Library Display Honoring (Only) Christian Soldiers
"The oener probably didn't want the hassle of pressing charges after the problem was dealt ..."
Brian Shanahan “God” Told a Couple to Get ..."
"Let me get my doctor's lab coat and stethescope then."
Brian Shanahan Quebec Court Upholds Religious Symbols Ban ..."
"Do you know what'd kill wearing the burqa, and overnight at that? Telling muslim men ..."
Brian Shanahan Quebec Court Upholds Religious Symbols Ban ..."
"Mr. Mehta, your attitude is unmistakable in your writing. That's not a problem. I enjoy ..."
Bob Johnson Here’s How Well-Known Atheists Are Defending ..."
Browse Our Archives
What Are Your Thoughts?leave a comment