The folks at Homeschoolers Anonymous recently got their hands on some old workbook pages used at the Institute of Basic Life Principles. That would be the Christian ministry founded by Bill Gothard, a man who resigned as President a couple of years ago after 34 women accused him of sexual harassment.

In these workbook pages, which are approximately 20 years old but still aligned with the ministry’s current teachings, students are presented with a question: “Why did God let a four year old boy be molested by a fifteen year old neighbor?” 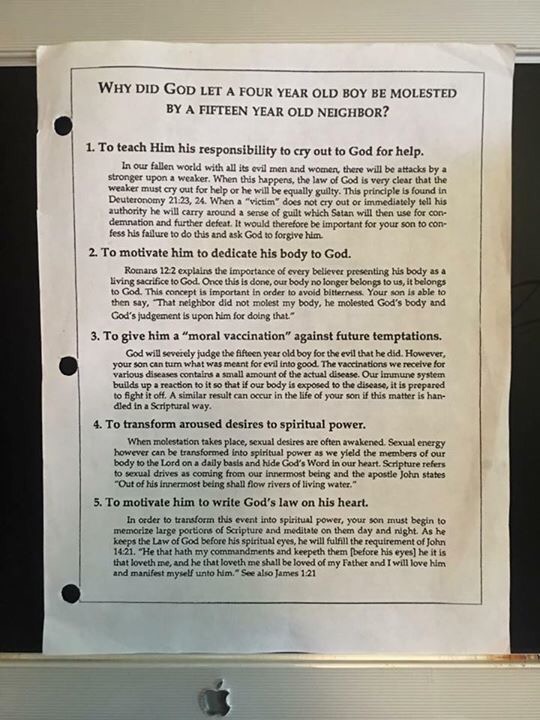 Besides the odd phrasing that suggests the four-year-old did something to get molested instead of focusing on the teenager who committed the crime, it’s also a really weird way to talk about why God allows bad things to happen…

And the responses on the page were no better, blaming the victim time and time again.

Just look at Reason #3: “To give him a ‘moral vaccination’ against future temptations.”

God will severely judge the fifteen year old boy for the evil that he did. However, your son can turn what was meant for evil into good. The vaccinations we receive for various diseases contains a small amount of the actual disease. Our immune system builds up a reaction to it so that if our body is exposed to the disease, it is prepared to fight it off. A similar result can occur in the life of your son if this matter handled in a Scriptural way.

So… it’s a good thing the boy got molested because, now that it’s happened, he’ll be better equipped to fight it off in the future? That is some fucked up reasoning right there. I don’t need to get stung by a swarm of bees, either, to know I never want it to happen.

One thing fundamentalism likes to teach is that God allows bad things to happen to us in order to prepare us for the future. It is a twisted way of taking ‘all things work together for good’ and applying it to abuse and other very negative things. Gothard is making a very young child responsible to protect themselves from here on out.

It is their job to recognize and stay away from further abuse because it happened once. This is viewed as a good thing, a lesson to be learned. A frequent phrase might be ‘What can we learn from this?’, as though abuse is only a character lesson, instead of the horrifically wrong action that it is.

The whole worksheet is like this — and that picture is only half of it. You can see the entire thing and read a complete breakdown on the Homeschoolers Anonymous website.

I would take special note of just how despicable Reason #6 is: “To concentrate on God’s hatred of sodomy.” As if God allowed a boy to get molested by another boy to teach the younger one a lesson about the evils of homosexuality.

August 11, 2016
The Incredible Potential Power of Genetic Engineering
Next Post

August 11, 2016 Christian Liar David Barton: You'll Have to Answer to God One Day, So Vote for Donald Trump
Browse Our Archives
What Are Your Thoughts?leave a comment