The Jehovah’s Witnesses Allowed a Sex Offender to Proselytize Door to Door… Then Someone Noticed August 10, 2016 Hemant Mehta

In 1992, Waymon Chandler Ivery was convicted of First Degree Sexual Assault on a Child.

A YouTuber/Redditor named Roman Vargas was told by a Jehovah’s Witness friend years ago that Ivery lived in his neighborhood. There was even a Facebook post made about the situation. You don’t forget that kind of information and Vargas memorized what Ivery looked like. Because if he was a JW, it meant he might one day be going door to door to proselytize…

That’s a scary prospect, isn’t it? A pedophile going to strangers’ houses, where kids are present, and perhaps even being invited in…

Vargas fears came true recently when he saw Ivery making the rounds. So he went to go confront the man along with the people who were knowingly knocking on doors with him: 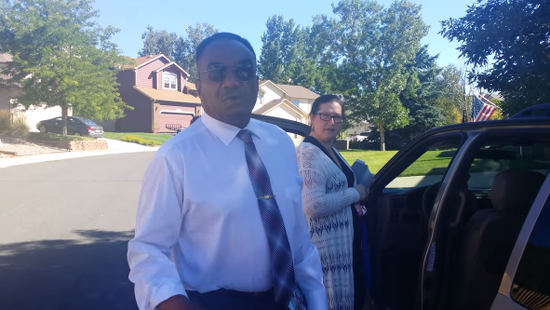 Ivery denied the accusations at first… but almost immediately, you see him try to get in the car and get out of there. An elder, sitting in the back seat, shields his face with his hands, as to avoid any complicity. (The driver, at first, seems pleasantly surprised that Ivery was recognized. Her smile fades quickly when she discovers why.)

But think about what this means: Given that elders are fully aware of the people working for them, the JWs knowingly let a convicted predator knock on doors in the name of Jehovah. Do the people in that community know this? Do the parents of households with children? Who knows. But the Jehovah’s Witnesses know it. And they’re fine with it.

Covert Fade, a former Witness writing at JW survey, notes the seriousness of this problem:

… Ivery was not approached while shopping for food, or watching a movie, or even strolling along a busy street minding his own business. He was approached because he was engaged in a work that involves him calling at the homes of his neighbors.

I spent almost thirty years of my life engaged in the door to door ministry of Jehovah’s Witnesses, and can report that it is not uncommon for the door to be answered by a young child. I know that very often in this situation, the Witness will ask: “Hello. Can I speak to Mommy or Daddy please?”

Often the child would then run to get their parents, but I personally saw a handful of moments where the child replied: “They are not home.”

… can you imagine how the scenario might have played out if the Witness on the doorstep was a predator struggling with a long-term desire to harm children?

I assume that Ivery has paid for his crimes, but that doesn’t necessarily mean he now has the ability to knock on random doors. There are limitations to what sex offenders can do even after they’re released from jail.

Why would the JWs be this irresponsible? Judging by that backseat elder’s reaction, they know this looks bad. It’s one thing to forgive Ivery for his crimes. It’s another to ignore them entirely.

***Update***: Be sure to check out Lloyd Evans’ video about this situation:

(Thanks to tazemanian-devil for the link)