Christian Website Offers Advice on How to Handle a Black Man Marrying Into Your White Family August 9, 2016 Hemant Mehta

***Update***: The Gospel Coalition took down the article after all the backlash, but you can read it here.

When it comes to issues Christians need advice about, it’s a sad statement that, in 2016, some of them may need help dealing with a black person marrying into their family. 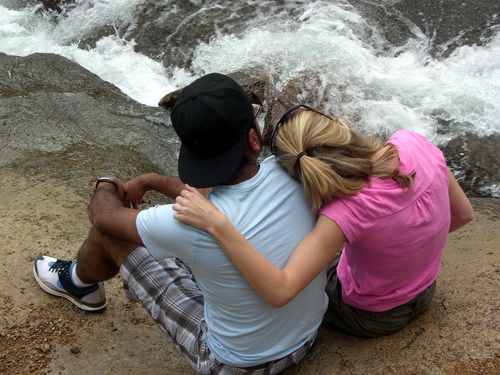 That’s the subject of a recent article at The Gospel Coalition’s website called “When God Sends Your White Daughter a Black Husband.”

To be sure, writer Gaye Clark doesn’t think this is a problem. Her goal is to help people who think it is. The fact that those people exist is what’s depressing. It’s also not surprising. Hell, Bob Jones University didn’t drop its ban on interracial dating until the year 2000.

So what advice does Clark offer? Here’s a glimpse:

As you pray for your daughter to choose well, pray for your eyes to see clearly, too. Glenn moved from being a black man to beloved son when I saw his true identity as an image bearer of God, a brother in Christ, and a fellow heir to God’s promises.

She sees him as a fellow Christian, which is fine, but only by ignoring his race. She’s like the character Stephen Colbert played for so many years, pretending to not see race in an effort to deflect from his own shortcomings on the subject. This isn’t an either/or situation. He can be black and a Christian.

4. Remember to be patient with family members.

Calling Uncle Fred a bigot because he doesn’t want your daughter in an interracial marriage dehumanizes him and doesn’t help your daughter either. Lovingly bear with others’ fears, concerns, and objections while firmly supporting your daughter and son-in-law. Don’t cut naysayers off if they aren’t undermining the marriage. Pray for them.

I have a hard time getting behind this one, though it may just be a difference of tactics. As someone in an interracial marriage — though admittedly not one with the historical weight of a black/white marriage — I’m fully aware there are bigots in my extended family. It’s not our job, though, to teach them how to be decent human beings. Bigots exist in part because not enough people close to them call them out on their bigotry.

Forget patience. If I’m around those people, I play up how Indian I am and make them really uncomfortable. (And then I tell them how we’re going to raise our baby as a Hindu, just for shits and giggles.) It’s up to them whether they want to stick around and be a part of our lives. We’re not going anywhere.

More than anything else, what’s disturbing is that Clark gets over their interracial-ness only because the black man believes in Christ. But what if he didn’t? What if her daughter fell in love with someone who wasn’t their kind of Christian, or a Christian at all? Just how far does this generosity go?

Clark also doesn’t need to take up this much space. If the topic is, “When God Sends Your White Daughter a Black Husband,” there’s a simple way to respond and it just takes two lines:

If your white daughter tells you she’s engaged to a black man, just ask her: “Are you happy?” If she says yes, you have nothing to complain about.

It shouldn’t be more complicated than that.

August 9, 2016
There Are Major Problems With the Australian Census That May Affect the Revised Religion Question
Next Post

August 9, 2016 Arkansas is One Step Closer to Putting an Illegal Ten Commandments Monument on Capitol Grounds
Browse Our Archives
What Are Your Thoughts?leave a comment