Earlier this year, the city of Charlotte, North Carolina passed a measure protecting LGBT rights, including the right of transgender individuals to use the appropriate bathrooms. Governor Pat McCrory and the Republican legislature later overturned that measure, leading to all sorts of national condemnation (and a loss of the 2017 NBA All-Star Game).

That didn’t stop conservative anti-gay Christian activist Flip Benham from showing up at a meeting of the Charlotte City Council last month to complain about the initial non-discrimination measure. Because God wants gay people to suffer, dammit. 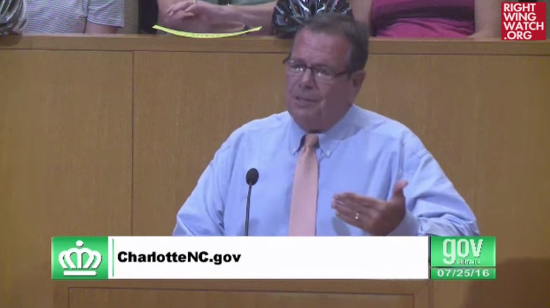 … what I just heard Mr. Mitchell read, and the way that you received it, was just a way of putting your middle finger right in the eye of almighty God and saying that “we are God.” That we determine what is right and what is wrong. We do. And this book [holds up Bible] is just discarded, this book called the Bible…

… There is one God, and his name is Jesus, and we’re going to stand for him in this city…

If God doesn’t fix this city, if God isn’t the answer, if God isn’t at the foundation, you’re going to have bloodshed coursing down the corners of our streets, our schools, and our workplaces, and you’re not going to have a police force big enough to stop it, because when you sow bloodshed in the womb — and [there are] three abortion mills here in this city — you’re going to reap it in the streets, and our God is a God of truth, and these things happen. When you cast God behind your back, violence always comes in to replace the void.

… Now we’ve got this transgenderism nonsense! Listen: It’s not a sin to be black! But it is a sin to be a practicing homosexual! It is a sin! It is not a moral right! It is wrong and you need to say so, and you’ve opened up the doors of Hell on our city. You and this council. And you need to repent!

If people ask you why so many people are leaving organized religion, just show them that video.

Benham, like so many evangelical pastors, was all bent out of shape because the government dared to treat LGBT people like human beings. And his Christian faith inspired him to fight against that. It’s not enough that evangelical churches are bastions of anti-gay bigotry; he wants the government to revere the Bible just as he does.

At least the council had the good sense to ignore him. They let him speak until his time was up and then moved on.

Benham’s rant is a perfect example of hate masquerading as Christian love. No one’s forcing him or his church to accept homosexuality. The city wanted to make sure public accommodations were not discriminatory. And he reacted by demanding that the city bow down to his God and his faith.

What else would you expect, though, from a man who once declared to a group of pastors that homosexuals “want you dead“?

August 9, 2016
Arkansas is One Step Closer to Putting an Illegal Ten Commandments Monument on Capitol Grounds
Next Post

August 9, 2016 A Former Jehovah's Witness Talks About How Being Disfellowshipped Affects His Entire Life
Browse Our Archives
What Are Your Thoughts?leave a comment