Even from the Pulpit, Donald Trump Loses to Hillary Clinton August 8, 2016 Hemant Mehta

Even from the Pulpit, Donald Trump Loses to Hillary Clinton

The bad news? A Pew Research Center survey shows some Christian pastors are endorsing (or opposing) presidential candidates in this election, in direct defiance of the law. 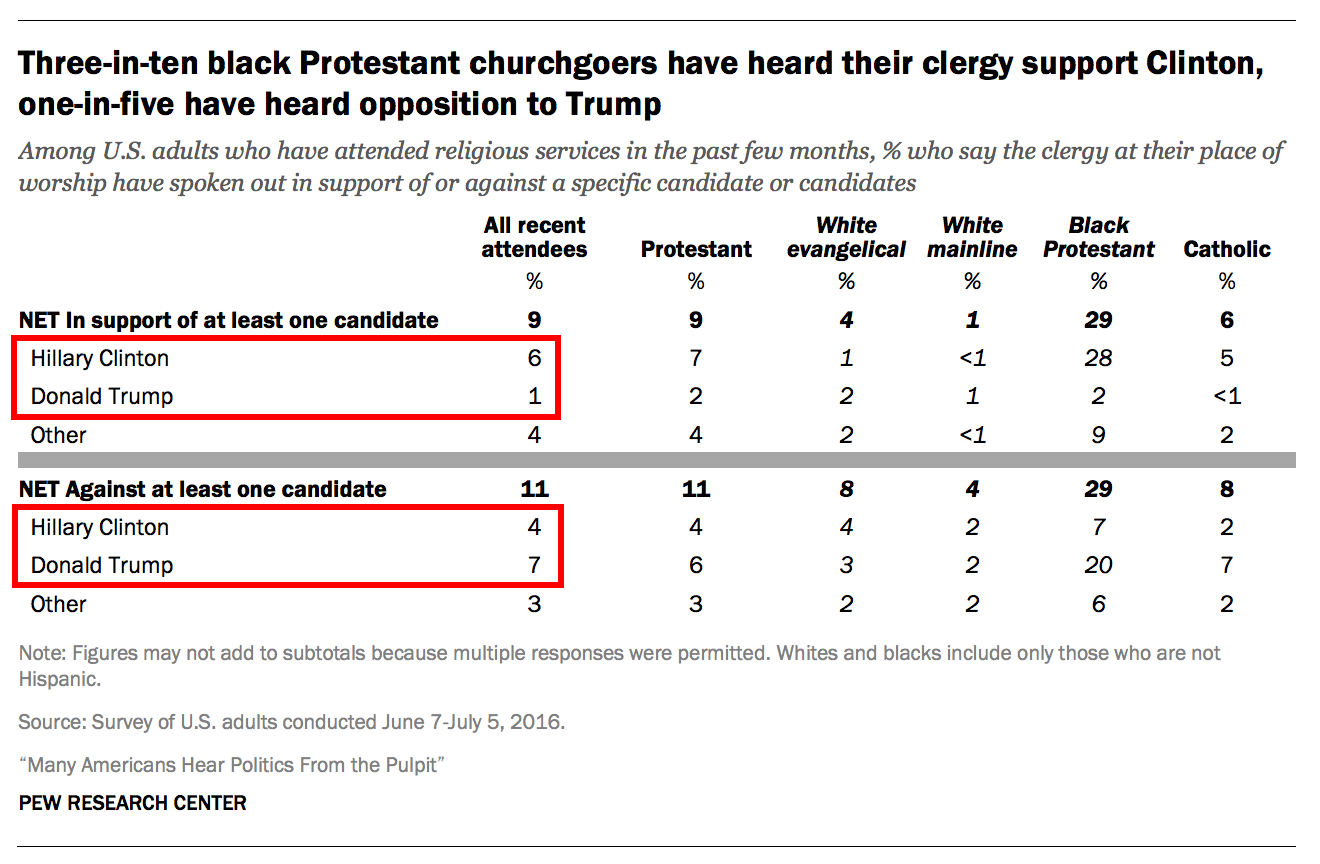 You know things aren’t going well for Republicans when they can’t even edge out Clinton from the pulpit… And things may be worse now. The survey was conducted before Trump’s disastrous convention and the controversy involving the Khan family.

Keep in mind that pastors shouldn’t be in the business of endorsing or opposing any candidates — at least if they want to hold on to their tax exemptions. The IRS has said they’ll pursue violations of the Johnson Amendment, but they’ve taken no actions in recent years despite plenty of opportunities.

And considering the discrepancy between support for Trump and Clinton is especially large at Black Protestant churches, you have to wonder if the IRS will step in. The Atlantic even used the headline, “Black Pastors Are Breaking the Law to Get Hillary Clinton Elected.” That’s very true, though white churches have been breaking the law to get Republicans elected for a long, long time, and no one’s come after them. What a scene it would be if the IRS finally took action by going after these majority-black churches, especially when white evangelicals have been baiting them for years.

The New York Times‘ Laurie Goodstein adds that efforts to repeal this rule have been promoted by the GOP:

Conservative Christian groups have long sought to challenge the Johnson Amendment on the ground that it violates First Amendment rights, and this year they succeeded in persuading the Republican Party to include a plank in its platform that calls for its repeal. In his convention speech, Mr. Trump thanked evangelicals for their support and said he would “work hard to repeal” the Johnson Amendment “to protect free speech for all Americans.”

It’s ironic, then, that even if Trump succeeds in his mission, the plan could backfire with pastors talking to their congregations about how horrible he is.

Even so, it’s no reason to get rid of the Amendment. Churches, like other non-profits, should decide what matters more to them: The tax exemption or pulpit endorsements. They should be allowed to have both.

August 8, 2016 Baptist Preacher Claims He Was Fired by Alabama Church for Inviting Black Kids to Bible Study
"I am not lying. I am responding to your lies.The evidence of the safety and ..."
Rogue Medic A Prominent Anti-Vaxxer Is Now Apologizing ..."
"What Trump's landslide meant this time is that Biden would win as many electoral votes ..."
Pennybird Here Are Preachers Predicting Trump’s Re-Election… ..."
"Well, I can get enough, but I did watch the first guy saying "Give me ..."
Pennybird Here Are Preachers Predicting Trump’s Re-Election… ..."
"or a crayon!"
MarcoZandrini Preacher: Don’t Call Me a False ..."
Browse Our Archives
What Are Your Thoughts?leave a comment