Christianity is Incompatible With the Universe As We Know It August 8, 2016 Hemant Mehta

Christianity is Incompatible With the Universe As We Know It

John W. Loftus has released his latest anthology of essays written by experts around one particular topic. This one is called Christianity in the Light of Science (Prometheus Books, 2016) and the chapters cover everything from Creationism to Jesus. 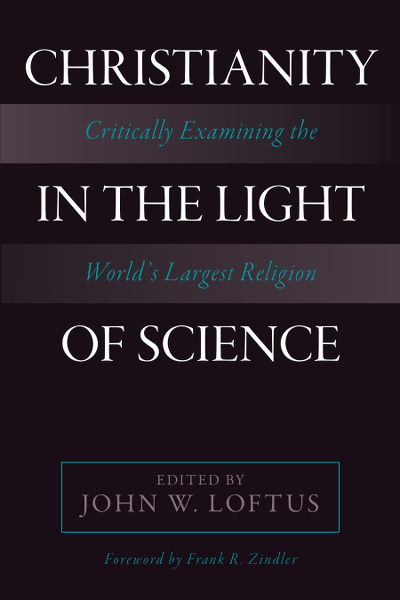 In the excerpt below, written by the late Victor Stenger, we look at whether the modern universe can have any compatibility with the Christian worldview:

CHRISTIANITY AND THE NEW COSMOS

Let’s now ask how the Christian faith fits in with our current scientific understanding of the cosmos, which far exceeds that of just a few decades ago. The universe visible from Earth contains an estimated 150 billion galaxies, each galaxy containing on the order of a hundred billion stars. It is known to be 13.8 billion years old, with an uncertainty of less than 100 million years. The most distant object we can in principle see is now 46 billion light-years away, taking into account the expansion of the universe during the time the photons carrying its image traveled to our telescopes. This marks a horizon beyond which we cannot see because light has not had the time to reach us in the age of the universe.

Well-established inflationary cosmology implies that on the other side of our horizon lies a region far larger than our visible universe, which arose from the same primordial seed.

And that’s just our personal universe. Besides that, there may be an eternal multiverse containing an unlimited number of other universes. However, for the purposes of this discussion I will ignore the possibility of other universes, which is still debatable, and just stick with the one that indisputably exists — our own.

So, let us consider two possibilities that are so far consistent with our best knowledge:

1. Intelligent life exists on only a single planet, Earth.

2. Life is rare, and intelligent life even rarer. But the universe is so vast that there still are countless numbers of intelligent beings in our universe.

Christians are told that they are the special creation of a lone divinity that created everything that is. While making sure every photon and electron in the universe behaves properly without us noticing, their God is also listening to their every thought and helping them to do the right thing — as he defines it.

This involves God controlling momentous events, such as telling a president of the United States to go to war, as George W. Bush said God did, or redirecting a tennis ball off a Christian lady’s racquet so it wins her the point as she shouts, “Thank you, Jesus!”

Of course, a God of limitless power could do all that. By why would he have waited until just 150,000 years ago to create humans? And why would he have confined them to a tiny speck of dust in a vast ocean of space, with no chance, at least with our present physical makeup, of ever traveling much beyond the environs of Earth? If he desired the worship of humans so badly, then you would think he should have made it available to him for all times and from all places.

Apologists make an illogical argument that they think is the clincher for the existence of God. They claim that life in the universe depends very sensitively on the value of a large number of physical parameters. According to this view, since the specific values of the parameters needed for life cannot possibly have resulted from chance (they can’t prove that), they must have been “fine-tuned” by God in order to produce us.

Surely any God worthy of the name would not have been so incompetent as to build a vast, out-of-tune universe and then have to delicately twiddle all these knobs so that a single planet is capable of producing human beings. It would have made a lot more sense for him to have enabled us to live anywhere in the universe, even outer space. But the fact is — he did not.

New estimates based on the brightness variations of thousands of stars measured by the Kepler Space Telescope suggest that within our horizon there may be as many as 5 × 1021 planets capable of sustaining biological life of some form. We have seen that beyond our horizon exists a far vaster region of space. It is estimated that this region that contains a minimum of twenty-three orders of magnitude as many galaxies as those inside our horizon but is likely to be much bigger. This gives at least 1044 possible habitable planets in our universe.

This is not pure speculation. It is based on observations and the theory of cosmic inflation that is now empirically well established. So even if the probability of intelligent life for an otherwise habitable planet is miniscule, say one part in a trillion-trillion (1024), that leaves 1020 planets with some form of intelligent life.

So, let us consider the scenario of a Christian God presiding over a universe containing a multitude of intelligent life-forms, all created in his image (being unlimited, he has an unlimited number of images) living on other planets. Of course, the Christian could simply say that this adds to the magnificence of her God. But the God of Christianity does not hold a patent on magnificence. The gods of all the major religions are equally magnificent. Christianity is more than the worship of an infinite being. It is the worship of a highly personal God who so loved the world that he sent his only begotten son there to die an excruciating death on the cross to atone for the sin of the first human beings eating from the Tree of Knowledge.

In The Age of Reason, Thomas Paine wrote, “Are we to suppose that every world in the boundless creation had an Eve, an apple, a serpent, and a redeemer?” Of course, Paine was unaware how vast this “boundless creation” really is. Jesus must be continually dying on the cross, every nanosecond or so, on some planet in our universe, in order to save from eternal damnation every form of life that evolved sufficient intelligence to eat from the Tree of Knowledge.

In the 1930s, astronomer Edward Milne suggested how multiple crucifixions across the universe could be avoided by Jesus dying just once, here on Earth, and the information of his act of atonement then transmitted by radio to other civilizations. However, it would take well over 46 billion years for a signal sent from Earth to reach every planet currently within our horizon, and even longer to reach those beyond. So most intelligent beings would have to wait an awful long time to learn of the Atonement.

While I know of no official policy on this question provided by the Catholic Church or any Protestant denomination, the Vatican is not unaware of the problem. Speaking unofficially, in 2008 the director of the Vatican Observatory, Fr. José Gabriel Funes, told L’Osservatore Romano, the Vatican newspaper, that there may be other intelligent beings created by God. However, he suggested, “They could have remained in full friendship with the creator.” He likened humans to “lost sheep” for which “God became man in Jesus to save us.” The other intelligent beings did not necessarily need redemption. (The fact that none have communicated with us yet could indicate that they avoided eating from the Tree of Knowledge and, as a result, never developed radio.) According to Funes, “Jesus became man once and for all. The Incarnation is a single and unique event.”

So, if Funes is accurately reflecting Catholic thinking, humans remain the favorite of God — although a strange kind of favorite who needs redeeming while the countless other intelligent life-forms do not.

My guess, based on what one hears from pulpits across America, is that Protestants would take the same view. Of course, fundamentalists still believe literally in the cosmology of the Bible and think scientists are a bunch of frauds, so they have no self-contradiction here. Science is just wrong. There is just one universe created six thousand years ago (and no evolution or climate change, which are just “hoaxes”).

Moderate Protestants, on the other hand, have yet one more conflict between science and religion among the many that they must reconcile in order to both accept the findings of science and also still hold on to some semblance of Christian faith.

Religion claims to teach us humility. But it really trades in a false pride, telling people they are the children of God, that they are the center of the universe and the reason for its existence — that they’ll live forever if they just follow instructions. But it’s an unearned pride. So, when science shows that we, for a brief time, occupy but a tiny mote in space and time, the religious recoil from this lesson in humility.

Still, the very fact that in the short period of a few thousand years humans have been able learn so much about the universe by just looking up in the sky and at the world around them, and reasoning over what they saw, testifies that we are unique among the millions of species on this planet. A dispassionate alien observer of life on Earth could only conclude that it is meaningless, brutal, and short — with one possible exception.

We cannot yet compare ourselves with whatever intelligent life-forms might be out there. But we are special, at least on Earth and the solar system. Even though magical thinking and hubris may still destroy us, we can hope that our unique abilities will lead us to a better future.

Christianity in the Light of Science is now available on Amazon.

Christianity in the Light of Science is edited by John W. Loftus and published by Prometheus Books (2016)

August 8, 2016
Pensacola Officials Say Giant Christian Cross on City Property Has Nothing to Do With Christianity
Next Post

August 8, 2016 Our Pale Blue Dot Is Even Smaller Than We Imagine
"And that, thanks to baby Jesus' Holy Smiting, Boys and Girls, is how we got ..."
Mundusvultdecipi Scott Lively: I Asked God to ..."
"Okay, he tells us what he wants. Does he even attempt to justify any of ..."
Synfandel MAGA Cultist: “I’ll Admit It. I ..."
"Holy Moley!!!"
Mundusvultdecipi Scott Lively: I Asked God to ..."
"Unlubricated."
NOGODZ20 Polish Court Acquits Women Who Depicted ..."
Browse Our Archives
What Are Your Thoughts?leave a comment