Jonathan Greer, a Baptist pastor from Alabama, claims he was fired from Mt. Sterling Baptist Church for the sin of inviting black children to the church’s Vacation Bible School. Can’t have that now, can we? 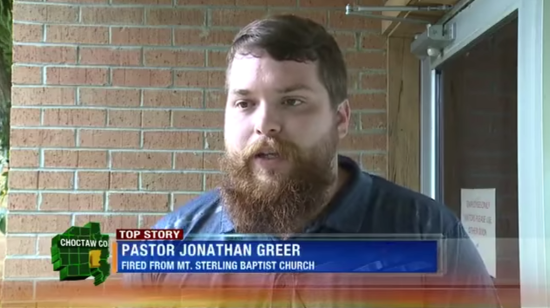 “There was pushback about where the types of children we were bringing in, and I was asked to not invite black children to VBS,” Greer said in an interview with WTOK-TV.

That last statement is especially telling. It suggests black people can drop in on a service (when the late is being passed around, naturally), but it doesn’t directly address Greer’s concerns about whether black people can enroll their kids in the Bible camp. It also doesn’t help that the church is predominantly white despite being located in a mostly African-American community.

Greer made clear that it’s not like the deacons directly said, “No black people.” They were rather coy about it.

He said some members of church leadership give him a list of reasons for his firing, “but they were all related to negative things happening if black people started coming.”

Lots of dog whistles, I imagine…

There is a little more to the story. After Greer says he had a conversation about race with the deacons, he delivered a sermon to the congregation about racism. And talking to southern white people about racism is not always an easy conversation to have. It resulted in Greer having to apologize for some of the things he said:

Greer preached on racism the following Sunday and a vote on his termination was scheduled for the subsequent week, in keeping with the church’s bylaws. Greer later apologized publically and privately for broadly classifying the congregation as racist in his sermon.

“I didn’t realize that there were more people in the church … that were okay with people [of all races] coming,” Greer said. “And in my sermon, I didn’t account for that. I kind of lumped everyone together.”

At least four people who voted to terminate Greer have said they are open to black people attending church events, Greer stated. Seven or eight members, he alleged, said they voted for termination explicitly because he wanted to invite black children to VBS.

Whatever the cause, maybe the question local reporters should be asking is how many black kids are in that Vacation Bible School? And if there are indeed black church members, what do they make of this situation?

After trying to talk sense into the congregation at large, Greer was fired without severance.

August 8, 2016
Even from the Pulpit, Donald Trump Loses to Hillary Clinton
Next Post

August 8, 2016 The City of Williamstown (KY) Says Ark Encounter is "Historically Authentic"
Browse Our Archives
What Are Your Thoughts?leave a comment