A lot of books and websites that offer arguments against religion look identical. There’s the theist claim, followed by the atheist rebuttal. Pascal’s Wager? Here’s why it’s wrong. The Teleological argument? Here’s how you can respond to it.

But the truth is that many of the conversations you have with people who are religious — if you’re debating religion, anyway — aren’t really about those classic apologetics arguments. They’re much more emotional. At least in my case, I’ve heard far more people tell me they know God exists because of a personal experience they had, not because the universe had to have a First Cause.

Dr. Peter Boghossian, the professor who wrote A Manual for Creating Atheists, has just released an app in the U.S. called Atheos, designed to help atheists steer through those conversations in a “non-confrontational, productive” way: 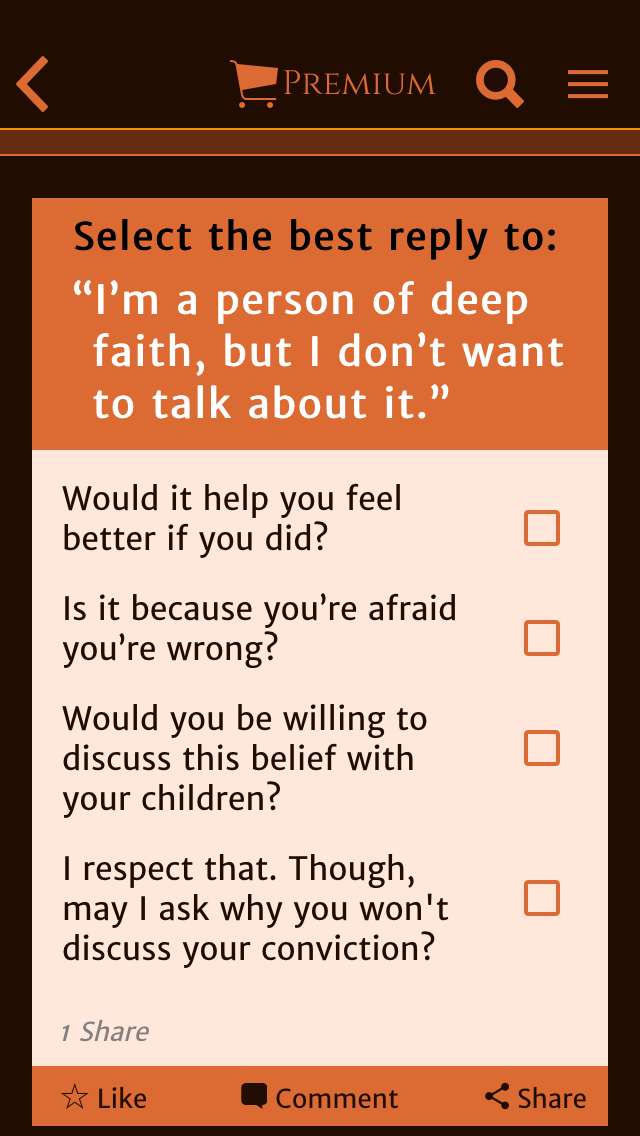 Its purpose is to encourage people to reflect on how they arrived at their beliefs and conclusions, and to model this reflection in conversations with others. It allows users to examine and engage with faith-based beliefs in a constructive manner specifically tailored to intervene in people’s cognitive processes and to break through dogmatism.

The bulk of the app is a large set of multiple choice questions asking how you’d respond in certain situations. Spoiler: The “You’re an idiot” kind of response is always wrong. The right answer is the one that engages the other person and steers them toward a conversation about how their mind is processing information. Every time you give an answer, the app offers an immediate explanation as to why one answer is better than the others.

There may be some argument as to whether the “wrong” answers really deserve that designation, but remember: The goal here isn’t to score points in a public debate or get a crowd to cheer for your brilliant zinger. The goal is to change how your opponents think, to help them understand why an evidence-based outlook gives them firmer footing, to persuade them adopt a more rational approach to life. And I will add that it’s not always clear what the best answer is.

In any case, it’s worth the download just to see what it’s like. I’ve seen websites and apps offer an encyclopedia of responses to these kinds of arguments — as if you’re going to whip out your phone in the middle of a conversation — but I’ve never seen a program that you’re supposed to use ahead of time in order to prepare you for these types of conversations. It’s a neat idea that I hope catches on. And for a first crack at an app, this is an excellent use of the medium.

You can download the app from iTunes or Google Play. It was created by Boghossian and sponsored by the Richard Dawkins Foundation for Reason and Science.

August 7, 2016 Podcast Ep. 121: Emma Green, Senior Associate Editor at The Atlantic
Browse Our Archives
What Are Your Thoughts?leave a comment