What We Can Learn from a 1991 Measles Epidemic

Dr. Paul Offit is one of the foremost defenders of vaccines. In 2014, he gave a talk at the Center for Inquiry about how a preventable disease had a resurgence in Philadelphia more than two decades earlier, in large part due to irresponsible parents who had religious reasons for avoiding vaccinations for their kids.

Due to outreach to those communities and better vaccine education in the community, however, the outbreak wasn’t nearly as bad as it could have been. That story, Offit says, contains plenty of lessons for us today, as there are still vaccine deniers out there. 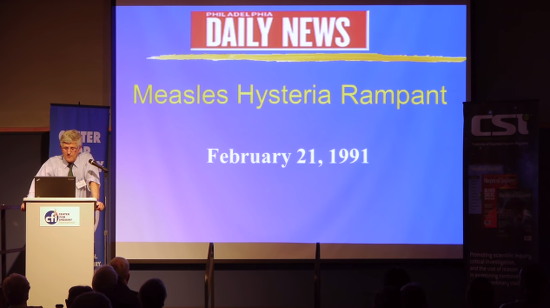 If any parts stand out to you, please leave the timestamp and summary in the comments!

August 5, 2016
A Conversation with Ex-Muslims Willing to Speak Out About Their Former Faith
Next Post

August 6, 2016 Here's How Liberty Counsel is Lying to Public Schools About the After School Satan Clubs
"That's exactly what I was taught in school 70 years ago. Nobody has tried teaching ..."
se habla espol David and Tim Barton Predicted Christians Wouldn’t ..."
"Okay, I misremembered the details, but yes, they still tried to pull the "creepy Joe" ..."
CanuckAmuck Right-Wing Host Slams Morgan Freeman’s Pro-Vaccine ..."
"The Southern Baptist Convention leadership was likely of two minds about her leaving. Keeping her ..."
Erp Beth Moore Apologizes for Being “Complicit” ..."
"There's also Tina Louise.My pipe dream would be launching a drone strike at Fox News ..."
ConnieHinesDorothyProvine Right-Wing Host Slams Morgan Freeman’s Pro-Vaccine ..."
Browse Our Archives
What Are Your Thoughts?leave a comment