Mike Pence in 2002: We “Have Seen the Consequence Over the Last 77 Years” of Teaching Evolution August 5, 2016 Hemant Mehta

Mike Pence in 2002: We “Have Seen the Consequence Over the Last 77 Years” of Teaching Evolution

When it comes to discerning Vice Presidential nominee Mike Pence‘s views on evolution (and, therefore, science in general), all we could point to for a long time was a 2009 interview with MSNBC’s Chris Matthews (when Pence was a House Representative) in which they discussed his beliefs: 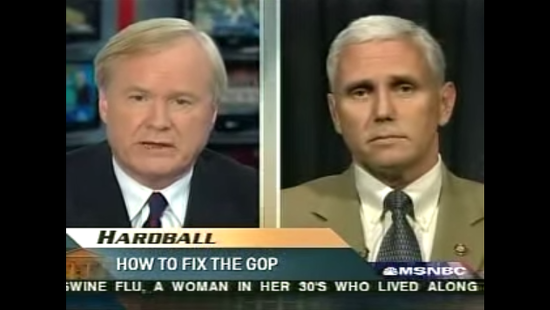 MATTHEWS: You want to educate the American people about science and its relevance today. Do you believe in evolution, sir?

PENCE: Uh, do I believe in evolution? I embrace the view that God created the Heavens and the Earth, the Seas, and all that’s in them.

MATTHEWS: Right, but do you believe in evolution as the way He did it?

PENCE: The means, Chris, that He used to do that, I can’t say. But I do believe in that fundamental truth.

PENCE: … On the global warming issue, I know that in the mainstream media…

PENCE: In the mainstream media, Chris, there is a denial of the growing skepticism in the scientific community about global warming…

MATTHEWS: Do you believe that we should be teaching science in school, or Creationism? See, this is the problem. I asked you: do you have a passion? And I don’t think the Republicans have a passion for global warming and issues like the green movement. You have skepticism about it… I would argue you have a very strong split position on the issue of science. You have people in your party who don’t believe in stem cell research and federal funding of that, who don’t believe in evolution…

MATTHEWS: Well, let me ask you this: Does your party agree on stem cell research?

PENCE: What is science but an exploration… of demonstrable fact, isn’t it? I think in our schools, we should teach all of the facts about all of these controversial areas, and let our students, let our children and our children’s children, decide based upon the facts…

MATTHEWS: So you accept the scientific method, then…

PENCE: … I accept the scientific method, but what the administration did on stem cells was ignore scientific breakthroughs that obviated the need to destroy human embryos for research…

There are lots of unforced errors in that exchange, but at least when it comes to evolution, Pence doesn’t take a firm stand one way or the other. He doesn’t accept it, but he also leaves some wiggle room in there.

Well, there’s no wiggle room in a speech he gave to Congress in 2002, which was uncovered by Right Wing Watch. Speaking of a new fossil discovery thought to be one of the “oldest known species in the human family tree,” Pence called into question the whole theory of evolution, even suggesting it discredited itself because of that word “theory.”

1925, in the famous Scopes Monkey Trial, this “theory” made its way through litigation into the classrooms of America and we all have seen the consequence over the last 77 years. Evolution not taught as a sincere theory of biologists, but rather, Mr. Speaker, taught as fact…

Paleontologists are excited about this this, Mr. Speaker, but no one’s pointing out that the textbooks, I guess, will need to be changed. Because the old theory of evolution, taught for 77 years in the classrooms of America as fact, is suddenly replaced by a new theory. Or, I hasten to add, I’m sure we’ll be told, a new fact.

Well, the truth is it always was a theory, Mr. Speaker. And now that we’ve recognized evolution as a theory, I would simply and humbly ask, can we teach it as such? And can we also consider teaching other theories of the origin of species? Like the theory that was believed in by every signer of the Declaration of Independence. Every signer of the Declaration of Independence believed that men and women were created and were endowed by that same Creator with certain unalienable rights. The Bible tells us that God created man in his own image, male and female. He created them. And I believe that, Mr. Speaker.

I would argue those are the dumbest words to ever come out of Mike Pence’s mouth, except we’re talking about a man who recently said, “Yes, Donald Trump, I’d be honored to be your Vice President.”

Just to run through the obvious rebuttals…

What’s interesting is that Pence believed all this bullshit during his 2009 MSNBC interview. When you re-read that exchange with Chris Matthews, realize that you’re observing a Creationist who is desperately trying not to announce that he’s a Creationist.

Maybe in the seven years between those events, he realized just how simple-minded he sounded.

***Update***: The Center For Inquiry wants to know whether Pence still holds these views. (I mean, he does, but they want it on the record.)

“The American people deserve to know whether Gov. Pence still thinks religious beliefs should be taught to our children in public school science class as a more plausible theory for human existence,” said Robyn Blumner, CEO of the Center for Inquiry. “He may hold whatever religious beliefs he chooses, but advocating that school children be religiously indoctrinated rather than be taught real science will handicap generations of students. He would apparently rather have America lead in biblical knowledge than scientific literacy — a recipe for economic disaster.”

“Gov. Pence has not only vehemently pushed for the teaching of creationism in schools, he has repeated the lies that cigarettes don’t cause cancer and that global warming is a ‘myth,’” said Blumner. “The implications of Gov. Pence’s views are disastrous, impacting education, public health, and the habitability of our planet. In order to make an informed decision as an electorate, we need to know whether he would still subordinate science to religion, and whether he continues to cling to views that are in conflict with the evidence on the true nature of reality.”

(via Secular Talk. Thanks to Jason for the link)

August 5, 2016
Mayor Who Once Gave God a Key to the City Arrested for Allegedly Playing Strip Poker with a Minor
Next Post