Last week, filmmaker Mick Kalber and pilot Colin Burkhardt flew over the Pu’u O’o crater in Hawaii when they caught the lava inside in a familiar position: 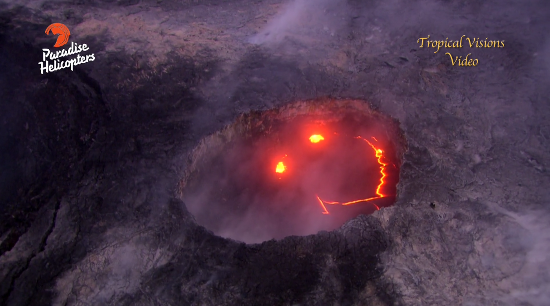 News websites were quick to jump on the “smiley face” image, as if the lava was sending us some sort of sign.

It wasn’t. (Obviously.) This is a phenomenon known as pareidolia, where you “see” a pattern even though there’s nothing really there. I guess we should be grateful people weren’t saying they saw Jesus, otherwise there would be a mass of people descending upon the volcano right now.

In case you’re wondering, there’s an actual scientific explanation for the “smiley face”:

As a lava lake circulates, lava upwelling and downwelling will occur on opposite sides of the lake, according to the Hawaiian Volcano Observatory. This often results in a spattering of molten lava, which creates bright spots on the dark-colored, semi-solid lake surface. Circulation can also cause sections of the surface to pull apart, revealing the lava beneath and creating lines.

Enjoy the image. But don’t make the mistake of thinking it’s a bigger deal than it really is.

August 4, 2016 Donald Trump Reiterates That He'll Let Pastors Endorse Candidates Without Losing Tax Exemptions
Browse Our Archives
What Are Your Thoughts?leave a comment