For weeks now, Donald Trump has been talking about how he plans to repeal the Johnson Amendment, which prohibits churches (and other non-profits) from making political endorsements.

That thinking is echoed in the GOP 2016 platform — and it’s a horrible idea.

Churches have the luxury of not paying taxes, and one of the requirements of that perk is that they don’t get to endorse candidates for political office. They can speak out against marriage equality, abortion, sex education, evolution etc. all they want… but pastors can’t tell their congregations, “Jesus wants you to vote for the Republican in this race.”

This isn’t about free speech, because pastors have every right to pay taxes and play politics. But they can’t have it both ways.

Not that Trump understands any of that nuance.

As recently as last night, in Jacksonville, Florida, he was telling the crowd how he plans to overturn the law barring politicking from the pulpit. 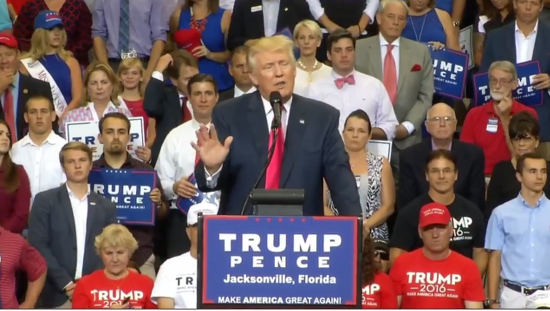 And that goes for all religions, too.

So we’re gonna get that taken out. Very important. And remember this also… we’re gonna get it taken out. It’s very unfair. It’s really free speech! I actually pointed to them in the room when they were telling me this, because they said “we can’t get involved politically.” I said, “That’s too bad.”

What Trump didn’t mention, because he doesn’t understand the issue, is that those people on the street pay taxes. If the churches are willing to give up the gift of tax exemption, no one would be stopping them from endorsing candidates.

Though as it stands right now, even if they do endorse candidates, they may get away with it. The IRS hasn’t revoked a single church’s tax exempt status despite promising to do so under these very circumstances.

Still, telling churches they have to abide by the law isn’t stifling their free speech. It’s reminding them that they have a choice — and they’ve chosen not to pay taxes.

(Thanks to Zeke for the link)

August 4, 2016
Pareidolia at Work: The "Smiley Face" Volcano
Next Post