Trae Crowder, the Liberal Redneck, made a video for the New York Daily News summarizing Donald Trump. Which is why this video is 87 minutes long. (I assume.) 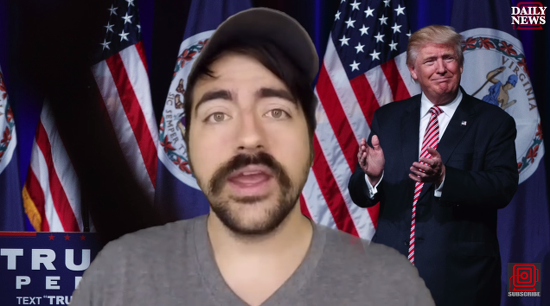 My favorite part is his response to Trump calling himself someone who’s sacrificed plenty (in response to the Khan family, whose son died as a war hero):

That’s like telling a woman who’s had a double mastectomy that you feel her pain because you almost bought into the Hooters franchise once.

At best, it’s tangentially related. And also, you’re a tone-deaf piece of shit.

“Tone-deaf piece of shit” is also the nicest thing I’ve heard people on Twitter say about Trump over the past 48 hours.

August 4, 2016
Christian Pastor: Men Rule Over Women at Home, and I'll Arm Wrestle Any Woman Here Who Disagrees
Next Post

August 4, 2016 Electronic Bibles Are Exempt from Pennsylvania's New Digital Tax, But It's Not a Big Deal
Browse Our Archives
What Are Your Thoughts?leave a comment