In a recent sermon, Pastor Steven Anderson proclaimed that “the husband’s the head of the wife,” then laughed off criticism that he was misogynistic because, he continued, “it’s like a new word” and he wasn’t interested in jumping on some “trendy” bandwagon. 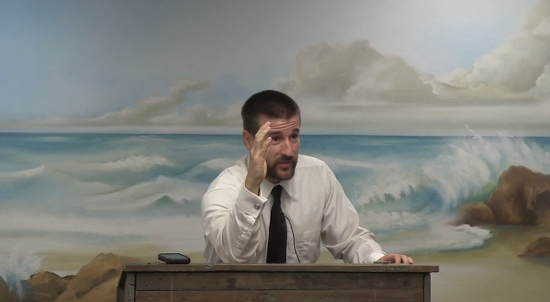 I get an email every day calling me “misogynistic.” What a stupid word. This is, like, a new word. I never heard that when I was a kid. I didn’t hear that. Did you hear that growing up?…

Anderson doesn’t get the problem with misogyny because things have “worked out great for a lot of people.” Which is true. Men are doing just fine.

And “misogynistic” isn’t a new word. (It’s actually from the mid-17th century.) Saying you never heard it growing up, as if that’s an argument for why this isn’t a big deal, is like saying there’s no sexual harassment taking place at Fox News Channel because Roger Ailes has always been nice to you. Just because you’re not the victim of it, and people don’t always talk about it in public, doesn’t mean it may not be happening.

Not-so-subtle homophobic slur aside, gender equality doesn’t mean men and women have to do everything the same way. Have the same opportunities? Yes. But no one’s forcing Anderson to dress like his wife as a way to promote feminism.

I want to tell Anderson to get a dictionary and look up the word “misogyny” so he doesn’t keep misinterpreting it, but I’m pretty sure he has a rule against opening up a second book.

Anderson went on to argue women who accept their biblical roles love it.

… honestly, women are just as happy in this lifestyle as men. When there’s a proper lifestyle, where the husband is the leader. Because here’s the thing: Women are not wired to want to be in charge and rule over a man. It goes against the grain with them to be the boss and make all the decisions. They love to be married to a strong man. Women don’t want to be married to a weakling…

There are no doubt women who accept and appreciate their traditional gender roles. But you know what would make that argument even stronger? Giving them the option of working outside the house, being a boss, leading a church, etc. and seeing what they do. For many women raised in fundamentalist Christianity, they’re taught from a young age that they must accept certain roles. Of course many would seem happy. It’s not like they’ve given any thought to the alternatives.

Even the feminist women, deep down, they’re like, “Please rule over me! Please be my leader!”

And then we got to the best part of all. Anderson challenged women to arm wrestle him. Because that’s how you settle all disputes about who’s really in charge.

… I’ve had about five women take me up on that over the years, and they all went down, and they went down hard, alright?

I’m shocked that the women in that church weren’t lining up to arm wrestle their pastor… though it’s definitely an incentive for atheist women to visit his church just to humiliate him in a match.

This is how toxic Christian masculinity works. Might is right, and the Bible must always be interpreted to give men the upper hand. Strong women? Women who want to be in positions of leadership and are fully capable of it? They’re cast aside as heretics. Just ask Hillary Clinton and the pastors who refuse to vote for her because of her gender.

Strong men — real strong men — don’t act like this. You only hear this kind of rhetoric from men who are afraid that women in positions of power would leave them in the dust.