The so-called “coolest Pope ever” might be a few shades more progressive than his pontifical predecessors, but he’s still no friend to transgender people. 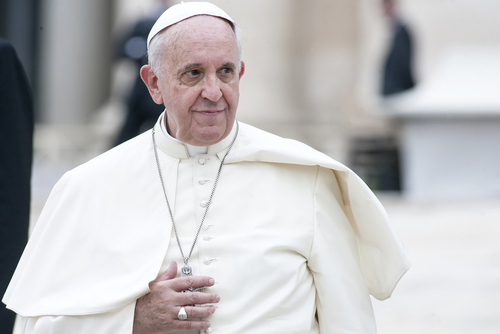 In a closed-door meeting with a group of Polish bishops last week, Pope Francis said that it’s “terrible” that children are taught about transgender identity and emphasized the importance of society upholding two “opposite” genders.

“Today, children are taught this at school: that everyone can choose their own sex,” Francis said last week, according to the Catholic Herald and other news organizations that read a Vatican transcript of the closed-door meeting. “God created man and woman; God created the world like this and we are doing the exact opposite.”

Teaching children that they can pick their gender, Francis said, is “terrible.”

According to the Associated Press, the Pope referred to society’s gradual acceptance of transgender people as an “annihilation” of traditional God-given values:

The pope said he wanted to conclude his remarks by reflecting on this: “We are living a moment of annihilation of man as image of God.” He added that his predecessor, Benedict XVI, had labelled current times “the epoch of sin against God the Creator”.

He said: “Today, in schools they are teaching this to children – to children! – that everyone can choose their gender.” Without specifying, he blamed this on textbooks supplied by “persons and institutions who donate money”. The pope blamed what he called “ideological colonizing” backed by “very influential countries”, which he did not identify. One such “colonization”, he said — “I’ll say it clearly with its first and last name — is gender.”

It’s not the first time the Pope has used annihilation metaphors to talk about transgender people; last year, he compared trans identity to nuclear weapons because both can “destroy a high number of human beings.” And while he has occasionally made comments supporting LGBT people, he’s not exactly an ally:

Early in his papacy, some in the LGBT community looked to Francis as a source of hope when he said about gay priests, “Who am I to judge?”

Since then, however, many have seen their hopes dimmed for change in the Catholic Church’s policies on gender and sexuality. Some thought that Francis’s major paper on family issues, which was completed in April, would offer some movement on gay relationships; it did not.

“There are absolutely no grounds for considering homosexual unions to be in any way similar or even remotely analogous to God’s plan for marriage and family,” the document said instead.

While this kind of rhetoric isn’t surprising coming from the highest-ranking official in the Catholic Church, whose catechism still says LGBT people are mentally disordered, it is disappointing to hear from Pope Francis, who has taken more progressive stances on social issues than any other pope in history. For example, just this week, it was announced that he may be looking into ways to expand roles for women in the church.

Unfortunately, his smattering of promising comments don’t make things easier for the millions of transgender people hurt by religious-based stigma. Until he stops with the anti-trans rhetoric and embraces LGBT people, women, and the other groups routinely torn down by the Catholic Church, he’s not as revolutionary as so many want him to be.

August 3, 2016 Christian Pastor: A Clinton Presidency Is the "Final Chapter" of Feminists' War Against America
Browse Our Archives
What Are Your Thoughts?leave a comment