Pat Robertson: Donald Trump Shouldn’t Let the Devil Distract Him From Talking About the Economy

How horrible of a presidential candidate do you have to be before Pat Robertson steps in to tell you you’re going off the rails?

Because that’s what the host of The 700 Club did yesterday, adding that Trump must be getting distracted by the Devil. 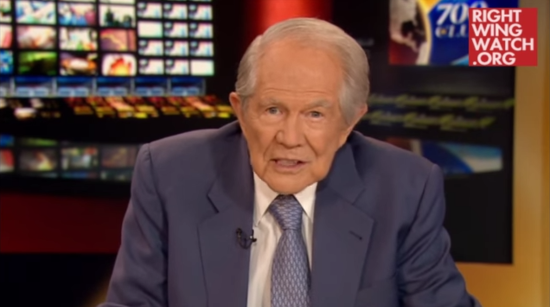 “The Lord has handed Mr. Trump a gift of 1.2 percent GDP growth, which is absolutely pathetic and horrible,” the televangelist said, noting that instead of talking about economic growth, Trump is talking about “Muslim heroes or fallen warriors.”

“Stay off that and talk about the economy,” he advised.

When cohost Wendy Griffith asked why Trump seems to be so easily “baited by these tweets and all these things,” Robertson said that “with Christians, the devil will get you off on rabbit trails every chance you get.”

First of all, despite Trump’s declarations of his Christianity, his actions and knowledge of the faith leave much to be desired, even by Christians.

And what a cop out to blame the Devil for Trump’s inability to stay focused, for all the idiotic things he says, and for lurking in the gutters he seems to love so much. That’s not Lucifer’s fault. That’s Trump’s own damn doing.

Robertson literally believes in the Devil, but even saying this metaphorically wouldn’t be any better. Both options suggest Trump isn’t responsible for his own actions.

You would think a guy who says as many ridiculous things as Robertson would understand that Satan isn’t guiding him to do it. They’re both choosing their words. And they both deserve the backlash that follows.

August 3, 2016
Christian Pastor: Hillary Clinton Should Not Be President Because the Bible Forbids It
Next Post

August 3, 2016 Texas Supply Store Responds to "Black Lives Matter" By Saying All Lives Matter... To Jesus
Browse Our Archives
What Are Your Thoughts?leave a comment