Christian Pastor: A Clinton Presidency Is the “Final Chapter” of Feminists’ War Against America

Pastor Kevin Swanson is no stranger to idiotic comments. He’s said Mark Twain was possessed by the devil, that the punishment for reading Harry Potter books should be drowning, that no one should buy Girl Scout cookies because the organization promoted lesbianism, that gay people love each other just like “cannibals love their victims.”

And he famously hosted a conference that included Republican candidates for President not long after saying homosexuals deserved to die (because the Bible said so).

You won’t be surprised to learn, then, that Swanson really doesn’t want Hillary Clinton to be President. On his radio show earlier this week, he explained that having a female Commander-in-Chief would be the culmination of the feminist movement’s war against America. 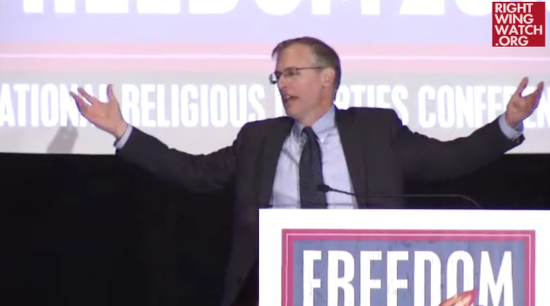 Swanson said that “feminism’s greatest victory” will be to take the place of men. “If they can achieve the ultimate zenith of power, this will become the final chapter, in a sense, of the present war that feminists have waged over this nation,” he said.

Swanson believes feminists are monolithic in their support of Clinton (they are not). Or that it’s a goal of feminism to dominate men instead of be treated as equals.

Needless to say, a Clinton victory in November would no more be the final chapter in the feminist movement any more than Barack Obama‘s presidency has ended the civil rights movement. There’s always more work to be done.

August 3, 2016
Pope Francis Calls Transgender People An "Annihilation of Man As Image of God"
Next Post