Dr. Jill Stein: Keep Your Kids Away From Wi-Fi Because It Might Hurt Their Brains August 2, 2016 Hemant Mehta

Dr. Jill Stein: Keep Your Kids Away From Wi-Fi Because It Might Hurt Their Brains

Many readers think we’re unfairly criticizing Green Party presidential candidate Dr. Jill Stein on this site as of late. I disagree. We’re merely quoting her beliefs verbatim, just as we would any other candidate whose statements appear to be anti-science.

It’s disturbing that Stein couches any support for vaccines with language that suggests they’re not as safe as we think they are. (Spoiler: they’re safe.) She also deflects criticism by saying she’s merely raising questions, taking a page from Jenny McCarthy‘s playbook. Now, in a video that was apparently filmed this past March, Stein argues that children should stay away from wireless internet because it’ll hurt their brains. Somehow. Because she said so. 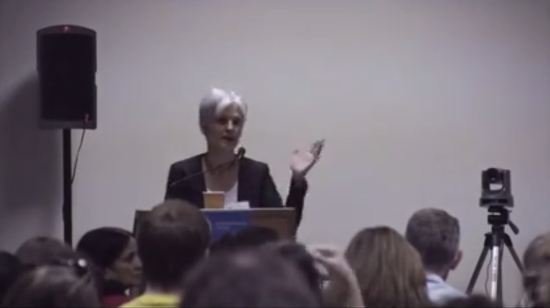 AUDIENCE MEMBER: My school district is rapidly moving towards one-to-one computers. Can you speak to the health issues?…

JILL STEIN: Wonderful, health issues, social issues, you know, you name it. But to be staring at screens? You know, we already know that kids who get put in front of TVs instead of interacting, this is not good in all kinds of ways. And it’s just not good for their cognitive development, it’s not good for their social development, I mean, that is incredible that kids in kindergarten… We should be moving away from screens at all levels of education, not moving into them.

And this is another corporate ruse. This is another gimmick to try to make a buck. To make big bucks, in fact. And education, and teachers, and communities suffer. So we need to stand up to that.

AUDIENCE MEMBER: What about the wireless?

STEIN: We should not be subjecting kids’ brains, especially, to that. And we don’t follow that issue in this country, but in Europe, where they do… they have good precautions around wireless — maybe not good enough… because it’s very hard to study this stuff… We make guinea pigs out of whole populations and then we discover how many die. And this is like the paradigm for how public health works in this country and it’s outrageous, you know…

Who the hell are her science advisors? Needless to say, she’s wrong again.

Not only has wireless internet not been shown to lead to brain damage, every teacher in America will tell you the importance of students becoming adept with computers. It’d be foolish to remove them completely from the school system.

So why would Dr. Jill Stein repeat this nonsense?

Either she genuinely believes it, which would be horrifying, or she’s just pandering to the anti-science crowd to get votes, which reeks of desperation and should turn off her progressive base. I expect to hear this kind of nonsense from someone like Dr. Ben Carson, whose statements about science have long been in question. But from a self-described progressive? It’s disappointing to say the least.

August 2, 2016
If Asked About Creation and Evolution, Donald Trump Was Told to Respond With "I Believe in Both"
Next Post