We know there’s no bottom to what Donald Trump will say or do on the road to Election Day, but last night, he dropped down to another level by calling Hillary Clinton “the Devil.” 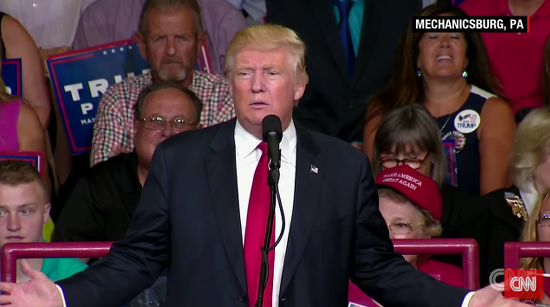 … He made a bad deal. He should have not made the deal. He would have gotten out and done something really important. Once he made that deal, and believe me, he has buyer’s remorse… He looked at that, and he was so angry when they were talking about him, and his people were angry at him, and they should be.

If he would’ve just not done anything — just go home, go to sleep, relax — he would’ve been a hero.

Was he being serious? Was it just a figure of speech? What does that even mean? (Does it matter?)

Consider this: Last week, Trump called on the Russian government to commit cyber espionage against Clinton to find her deleted emails. When pressed on his very serious and treasonous remark, he dismissed the criticism, saying, “Of course I’m being sarcastic.”

So what was it this time? Honesty? Sarcasm? Can anyone tell the difference with him?

It’s not even the first time this campaign we’ve heard a prominent Republican calling Clinton the Devil. Just two weeks ago, when Dr. Ben Carson addressed the crowd at the Republican National Convention, he did the same thing (around the 4:10 mark below):

… One of the things that I have learned about Hillary Clinton is that one of her heroes, her mentors, was Saul Alinsky.

And her senior thesis was about Saul Alinsky.

This was someone that she greatly admired and that affected all of her philosophies, subsequently. Now interestingly enough, let me tell you something about Saul Alinsky. He wrote a book called Rules for Radicals. On the dedication page, it acknowledges Lucifer, the original radical who gained his own kingdom.

As odd as that logic is, at least Carson tried to justify his insult.

Trump didn’t even bother with that. He went straight to name-calling. And the crowd ate it up.

Maybe it was Trump’s way of reminding evangelicals to stay in his base. Maybe he’s upset Clinton got a post-convention bounce in the polls and he’s trying to find a replacement for calling her “crooked” since that’s losing its power.

But when a candidate has to allude to an imaginary monster to take down his opponent, it’s a clear sign he doesn’t have any real arguments to use against her.

August 2, 2016 Franklin Graham, Unaware of How the Law Works, Wants Schools to Block After School Satan Clubs
"Good person: "You are a bad person!"Bad person: "You are a good person!"Good person: "Thanks."Bad ..."
Zasz David Barton: If People Call You ..."
"I mean, I've been saying #CancelTheStraights for years, but I'm also not, you know, pushing ..."
Dom S David Barton: If People Call You ..."
"So with 2 boys, age 12 and 10, I will say that I never, in ..."
The Bofa on the Sofa Christian Mommy Blogger: Hit Your Kids ..."
"Nannybot doesn't like dictionaries."
RegularJoe Conservative Christians Should Admit Biden Advances ..."
Browse Our Archives
What Are Your Thoughts?leave a comment