The DNC Email Leaks and a Message for Bernie Bros: Liberal Redneck Edition

Trae Crowder, the Liberal Redneck, made a video for the New York Daily News about the leaked DNC emails and how “Bernie Bros” need to just get over it and start acting like the progressives they claim to be: 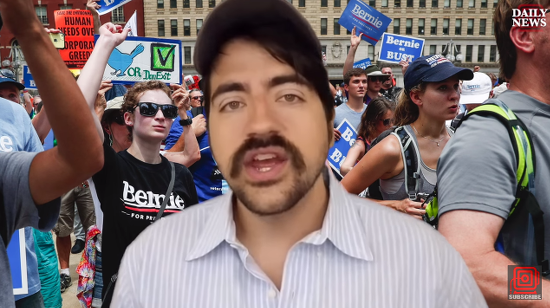 Guys, please listen to me. Look, I love Bernie, too. I voted for the man, but it is over. Some of y’all are worse than the South about the damn Civil War! We got beat, y’all!

I still don’t understand the logic behind anyone who thinks it makes more sense to stay home on Election Day or vote for a third party candidate (in a swing state, anyway). None of the third party candidates seems even remotely qualified to be President and not voting for the Democrat makes it that much more likely that a President Donald Trump will roll back whatever progress has been made over the past decades regarding civil rights, women’s rights, our nation’s standing in the world, etc. How selfish do you have to be to throw all that away because you hold some irrational view that both major parties are the same and equally corrupt?

If you’re going to help Trump by not voting for Clinton, at least consider the perspectives of people who voted for Ralph Nader in 2000.

July 29, 2016
Skeptics Shouldn't Be Criticized for the Issues They Focus On
Next Post

July 30, 2016 Salman Rushdie's Deeply Personal Reason for Respecting Hillary Clinton
""complementarianism"Ever notice how bigotry/misogyny/douchebaggery is often hidden in multisyllablely?"
Lurker111 Beth Moore Apologizes for Being “Complicit” ..."
"No, because they'll still do it. Look at their followers. It wouldn't even matter to ..."
Dmar3 Tony Perkins: Getting Rid of the ..."
"???"
SltryPrNstyBrtsh&Shrt Richard Dawkins is Still Denying the ..."
"That didn't answer my question. You say you were trying to make the point that ..."
CageGirl Richard Dawkins is Still Denying the ..."
Browse Our Archives
What Are Your Thoughts?leave a comment