On Thursday’s post-convention episode of Real Time with Bill Maher, author Salman Rushdie explained why he’s drawn to Hillary Clinton. It wasn’t just her policies, though I suspect he agrees with quite a number of them, but rather the way she’s handled herself after decades of constant irrational attacks from her opponents.

Rushdie, of course, has been the subject of a fatwa since 1989 for his perceived criticism of Islam in The Satanic Verses. 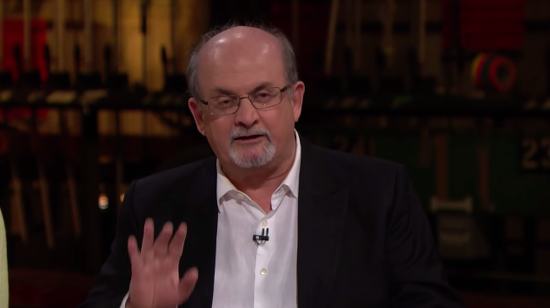 But I know in a kind of little personal way what it takes to have to stand up against that non-stop, cartoonizing, demonizing, creating a lie about you which you are powerless to resist because the people putting out the lie have a megaphone louder than you do, you know?

And if that’s me, if you would then magnify that to the national scale… and have somebody facing that in America every day for decades, and that she comes through as strong and tough as she does? I mean, respect.

As someone who plans to vote for Clinton, not just because I find Donald Trump despicable and unsuited for the office, but because I genuinely think Clinton is a strong candidate who doesn’t deserve most of the shit she gets for her supposed misdeeds, that argument carries a lot of weight with me.

Trump can’t take any criticism from journalists or other politicians without riling up his followers against them and blasting out an angry public message. Clinton has been called every name in the book from public figures and private citizens alike and carries on as if it never happened. That’s admirable. That’s not to say she ignores fair criticism, but that she’s not visibly affected by unfair attacks. It’s an impressive skill that very few people, celebrities included, possess.

July 30, 2016
The DNC Email Leaks and a Message for Bernie Bros: Liberal Redneck Edition
Next Post

July 30, 2016 Dr. Jill Stein Responds to Vaccine Controversy By Saying She's Just Asking Questions
"We're the only ones who care about our extinction. Well, some of us anyway."
cdbunch A Plumber Found Envelopes Full of ..."
"We may be heading toward yet another mass extinction event. As the five previous evidence; ..."
rationalobservations? A Plumber Found Envelopes Full of ..."
"I see in this morning's newspaper that the funding bill got approved after the Rethuglikkkans ..."
NOGODZ20 Evangelical Eric Metaxas, Who Told People ..."
"People thirty years ago would have said a lot of things we now know to ..."
Raging Bee Richard Dawkins Urges People to Sign ..."
Browse Our Archives
What Are Your Thoughts?leave a comment