Khizr Khan Calls on Republican Leaders to Repudiate Donald Trump for the Sake of the Country July 30, 2016 Hemant Mehta

Last night, in a spellbinding interview, Khizr Khan told MSNBC’s Lawrence O’Donnell that he only delivered half of his prepared remarks at the DNC when he rhetorically asked Donald Trump if he had ever read the U.S. Constitution and offered to lend Trump his own copy.

The part he didn’t get to deliver on stage was a heartfelt plea to House Speaker Paul Ryan and Senate Majority Leader Mitch McConnell — both Republicans whom Khan praised generously for their patriotism and leadership — to set aside politics and repudiate Trump for the good of the country. 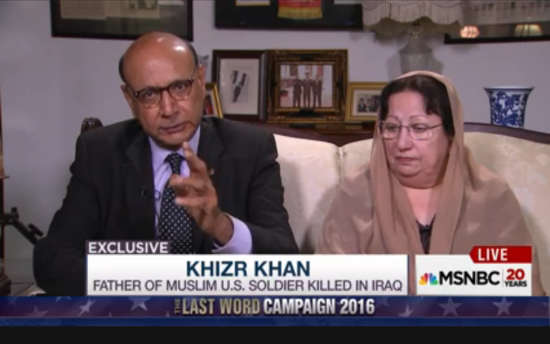 If your candidate wins and he governs the way he has campaigned, my country — this country — will have constitutional crises [like] never before in the history of this country, and my conscience compels me under these very difficult circumstances… But there is so much at stake, and I appeal to both of these leaders, this is the time.

There comes a time in the history of a nation where an ethical, moral stand has to be taken regardless of the political costs. The only reason they’re not repudiating his behavior, his threat to our democracy, our decency, our foundation, is just because of political consequences.

And for the second time in two nights, Khan damn near brought me to tears.

The couple’s kindness, patriotism, and decency in the face of bigotry and tragedy is incredible. It’s striking a chord with many people and we’re all better off because of that.

The Khans weren’t immune from criticism, though, even from atheists online. Just to address a couple of the points I read…

Does it matter that they’re Muslim and we disagree with their theology?

Absolutely not. There’s a difference between debating our ideas and denigrating Muslims. This entire conversation is about the latter, which is what Trump is doing. We should all be able to empathize with this family, embrace their patriotism, and defend them in a conversation about civil rights. There’s a time to debate our religious differences; this isn’t that time.

Shouldn’t we raise hell about the fact that Mrs. Khan didn’t speak? Isn’t that the result of faith-based patriarchy?

No and no. If you watch the full interview with Lawrence O’Donnell, Mrs. Khan speaks a number of times. There was nothing preventing her from speaking on the DNC stage, religiously or culturally. As best as I could tell, she simply felt her husband could deliver their message more eloquently. As he said in the interview, they worked together on the speech he gave on Thursday and she played a large role in that. But he’s a lawyer who has experience speaking under pressure — never an easy thing to do — and his message was on behalf of both of them.