Dr. Jill Stein, the Green Party candidate for President, finally received her big chance yesterday to straighten out the growing concern about her position on vaccines. 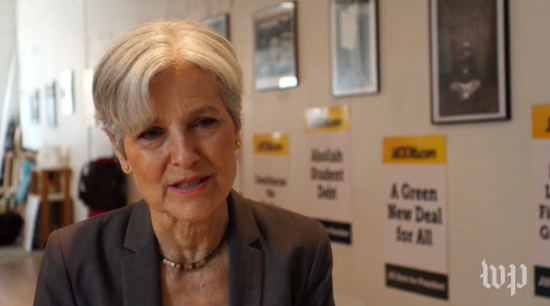 With people like me unfairly maligning her, as her supporters have been flooding this site to tell me, she had the opportunity to unequivocally reassure us and the American public that vaccines were safe and that she strongly encouraged their use.

The Washington Post even gave her a softball question, about whether vaccines cause autism, to begin their interview. Here was the doctor’s not-so-reassuring message:

She certainly cleared that issue right up, putting many an anxious parent’s mind to rest…

The Post also asked her if she thought vaccines were harmful:

I think there’s no question that vaccines have been absolutely critical in ridding us of the scourge of many diseases — smallpox, polio, etc. So vaccines are an invaluable medication… Like any medication, they also should be — what shall we say? — approved by a regulatory board that people can trust. And I think right now, that is the problem.

Once again, the correct answer was “No.”

And it got worse. A lot worse.

As a medical doctor, there was a time where I looked very closely at those issues, and not all those issues were completely resolved… There were concerns among physicians about what the vaccination schedule meant, the toxic substances like mercury which used to be rampant in vaccines. There were real questions that needed to be addressed. I think some of them at least have been addressed. I don’t know if all of them have been addressed.

You know, if there’s one person in the country we should expect to know basic facts about vaccines, you’d think it would be a doctor who has been running for president for the past year talking about these damn vaccines.

If she wanted to educate herself on the matter, she’d know by now, for instance, that the mercury question was resolved repeatedly and conclusively. And no, it was not found to be in “toxic” amounts or “rampant.”

Stein utterly refuses to provide any reassurance to Americans that vaccines are safe.

For every positive point she makes about vaccines, she follows it up, in the same breath, with a series of red flags intended to frighten the public:

We have a real compelling need for vaccinations… It requires an agency that we can trust to sort through all of those concerns. To assure the American public, whether it’s vaccinations, whether it’s administering estrogen to, you know, treat symptoms of menopause, or at one point it was the solution to prevent Alzheimer’s and then it was discovered — oh, my goodness — it may actually contribute to Alzheimer’s — it’s really important that the American public have confidence in our regulatory boards so that all of our medical treatments and medications actually are approved by people who do not have a vested interest in their promotion. In my experience, this is not a radical idea. This is basic common sense.

Stein’s warning about corporate influence in the vaccine approval process is often voiced by “anti-vaxxers.” In reality, most members of the Vaccines and Related Biological Products Advisory Committee work at academic or medical institutions, not drug companies. But for Stein, the fact that people saw corporate and lobbying influence running rampant meant that some skepticism was warranted.

What evidence does Stein have for suggesting vaccines are under undue corporate influence?

Monsanto lobbyists help run the day in those agencies and are in charge of approving what food isn’t safe… There is rampant distrust of our institutions of government right now.

Every time she discusses vaccines, she gives the same meaningless basis for stirring anxieties: Monsanto and GMOs. She offers no evidence of undue corporate influence over vaccines. But she knows well the power of the M- and G-words, so she never misses the chance to inject that fear, however irrationally. It’s the same patter every time, which means the obfuscation and manipulation are highly deliberate.

But as the article’s headline says, she’s just asking questions. 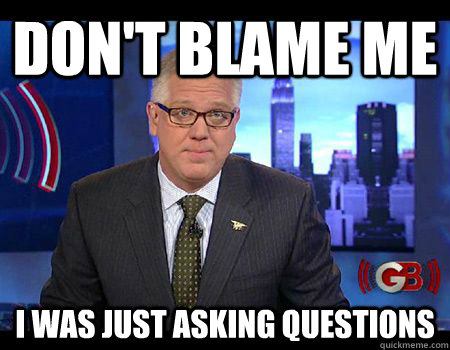 Stein’s supporters are stunned at the trouncing their candidate is receiving from the media for this interview. At the Washington Post, New York Magazine, and Slate, their plaintive cries are everywhere:

Since they’re bringing it up, let’s talk about that well-known phrase: “Just Asking Questions.”

It’s such an established concept in psychology and the field of critical thinking that it has its own RationalWiki entry:

Just asking questions is a way of attempting to make wild accusations acceptable (and hopefully not legally actionable) by framing them as questions rather than statements. It shifts the burden of proof to one’s opponent…

The tactic has become so widespread on the internet, it’s also landed in Urban Dictionary:

JAQing Off: The act of asking leading questions to influence your audience, then hiding behind the defense that they’re “Just Asking Questions.”

… the motif of “just asking questions” is rhetorically designed to open up the space for conspiracy theories while allowing those asking the questions to retain the aura of respectability.

In Suspicious Minds: Why We Believe Conspiracy Theories, psychologist and science journalist Rob Brotherton explains how it makes the accuser’s task so much easier:

[Using] the “just asking questions” tactic (sometimes shortened to “JAQing off”) [and] rather than postulating a coherent narrative, the theorist merely poses questions that appear to raise problems for the “official story” — always with the implication that somebody isn’t telling the truth — and leaves the task of figuring out the specifics up to the listener. This tactic, according to psychologist Mike Wood, seems to have gained in popularity with the Internet, where conspiracy theories can be debunked as quickly as they are postulated, and vagueness can serve as a useful shield from criticism.

This is all well and good, Dr. Stein, but what we need to know is simple: Are you or are you not an invading space lizard? We must recognize that concern about politicians who morph into reptiles is very real. I mean it’s basic common sense that being invaded by lizards from space is not what Americans want for our country. Hardly a radical idea. Sure, politicians are needed and some have been good, but they require the people’s trust, so worries about lizards need to be heard. The nation needs confidence no one with a three-foot tongue will be licking Oval Office walls. Now, I’m no lizard believer personally, mind you, I’m just asking questions on behalf of others. And anyone who has a problem with that must want to see America destroyed in an alien invasion or is an alien shill.

(Just Asking Questions also seems to be Donald Trump‘s unofficial campaign theme when it comes to talking about his opponents.)

Back on Earth, here’s a sampling of the comments I received from Dr. Stein’s anti-vax supporters this week, demonstrating the extreme paranoia her “just asking questions” is sowing. It’s quite upsetting.

The single most common comment I received (other than my being a paid shill for the DNC) is that another Patheos blogger defended Stein’s vaccine statements, which somehow makes the arguments on this site moot. The link to Dan Arel‘s post was posted dozens and dozens of times in triumph… even though it didn’t reference the two newly emerged videos that concerned me.

Sorry, folks, but you need a new champion. Even Dan criticized Stein after her statements yesterday:

…she is pushing that fear of the industry, just as she does with GMOs (an issue I have been vocally opposed of with her platform)…

I have to hold Stein accountable for pushing this distrust…

Stein is now stroking the anti-vaccination movement fears and playing right into their hands.

Does she think vaccines work? Yes… However, you can’t use bad science as a way to fight for better regulations, or a not-for-profit health incentive.

A leader needs to stand up against the movement that is killing children, not court their vote.

… this has me beat red and writing this while basically punching my keyboard.

I can overlook some bad science positions… But when it comes to vaccines, that is a make or break for me.

As for the less important side dispute over the definition of the label “anti-vax,” it’s a spectrum disorder in my book. I use it to describe the continuum of those who systematically discourage people from vaccinating by sowing vaccine distrust, regardless of whether they acknowledge benefits out of the other sides of their mouths. Remember that virtually no campaigners who sow vaccine distrust accept the label. They often call themselves “pro-safe vaccines,” or “pro-green vaccines.” Even Jenny McCarthy calls herself pro-vaccine.

Perhaps it shouldn’t be a surprise that the person who sounds most like Jill Stein on the issue is Donald Trump, whose November victory could come in part thanks to her candidacy.