Brad Trost is an MP in the House of Commons of Canada, and he’s essentially their version of Ted Cruz: Irrationally conservative, bigoted and proud of it, and eager not to give an inch on any issue since it’s all a matter of principle.

But one particular response in a recent interview stood out from the rest. 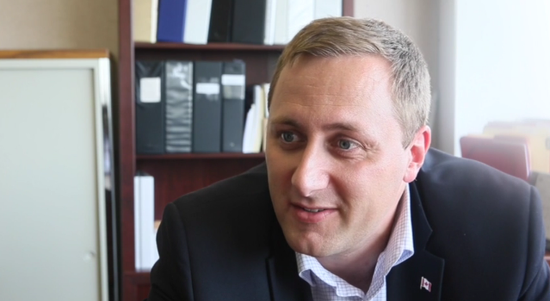 The reporter asked him about taxation and deficit financing. Trost’s response?

No taxes at all. God said so. That’s his conservative position.

The website PressProgress has no idea how that would work if implemented, since nations sort of depend on taxes to fund basic public services.

If he’s sure that is God’s intent — and that’s a big if — how is Canada supposed to run a functioning government without any revenues?

Without taxes, won’t our infrastructure fall apart? How do we pay for police and firefighters? Does God want us to be consumed by flames as chaos and anarchy reign across the land? This all seems so out-of-character for God… Hey, are we sure God told him this?

Trost didn’t get a chance to elaborate on how he’d provide any of those services without taxes — maybe he thinks God will just take care of everything — because he was off answering the next question:

“I don’t smoke and I don’t think you should either and we need to say no.”

Isn’t that the essence of the evangelical mindset? I don’t like it, so you can’t have it. I’m against abortion, so no abortion for anyone. I think homosexuality is a sin, so LGBT people don’t get any rights. I don’t smoke, so I’ll support the criminalization of weed. It’s all about them with no regard for anyone else.

Trost is exactly the type of person who has no business being in government since he’s clearly not looking out for the best interests of all people. He just wants to legislate whatever the voices in his head tell him to do. Even when the consequences would be devastating.

(Screenshot via Toronto Sun. Thanks to William for the link)

July 30, 2016
San Diego State U. Choir Class Required Students to Perform at Church and Sit Through Sermon
Next Post

July 31, 2016 A Cringeworthy Collection of Jesus-Approved Marriage and Sex Tips
Browse Our Archives
What Are Your Thoughts?leave a comment