My Son Asked Me: Does the President Have to Be Religious? July 29, 2016 Hemant Mehta

My Son Asked Me: Does the President Have to Be Religious?

This is a guest post by Maria Polonchek. She is writing a memoir on raising children without a religion. It will be published in the Summer of 2017 by Rowman & Littlefield. 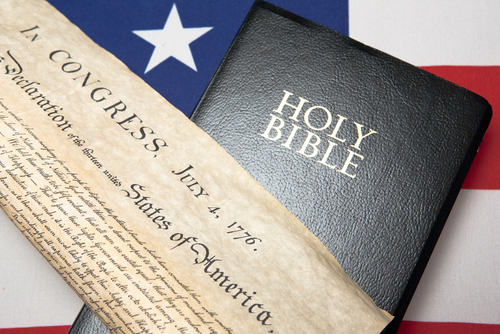 The night of my 37th birthday, my family cooked dinner for me and we sat down for a civilized meal with napkins, flowers, and steak knifes. It was the third night of the Democratic National Convention and as we settled in, my husband and I agreed that not having television meant we were missing out on some big moments: Twitter had been buzzing for several days about the powerful speeches: Michelle Obama, Bill Clinton, Gabby Giffords.

Chris and I reminisced about our first childhood tastes of the American political process and told our stories to the kids, two 11-year-old twin boys and a 6-year-old girl. The first debate I saw, when I was my sons’ age and growing up in Kansas, was between George H.W. Bush and Michael Dukakis in 1988: though my own parents were evangelical Christians they never mentioned a connection between religion and politics. They liked Democratic candidate Dukakis. And so that’s who I liked.

My memory skips forward to my early twenties, when I was on a break from university and the country was deciding between a new George Bush and Democratic candidate Al Gore. I was living with another evangelical family in Massachusetts and asked during a debate: “So, what’s the difference between Democrats and Republicans?”

“Republicans are the good guys and Democrats are just evil.” my host replied. “They want to take this country down a path of immorality. That’s all you need to know. Always vote Republican.”

Well, this answer pretty much locked down my avoidance of politics for another ten years. I immediately recognized that it couldn’t be right: I’ve never been one to think in such dichotomies. But I was also fresh out of high school, trying to hang onto the faith of my childhood, which was such a rich layer of my identity. So, I stayed out of it. No politics for me, thanks.

After I became openly secular and started a family, I was ready to try again. My first registered vote was for Barack Obama. The Democratic party stood for everything I valued and I was proud to embrace a party that gave me a choice between two faces and ideas that looked like what I thought the future looked like.

The night of my birthday, my husband and I decided to prop a laptop on a stack of books at our fancy little table setting and watch some speeches with our kids.

My children’s favorite was Michelle Obama. “This is so inspiring,” my son said, as he rested his chin on his folded arms and absorbed our First Lady. He absent-mindedly concluded, “I like her hair.”

When Michelle said “I wake up every morning in a house that was built by slaves,” we talked about why, and that’s when I realized my kids had no idea Barack Obama was our first black president. The twins were three when he was elected. He’s been their only president.

Now, my daughter’s first memory of an election will include a female candidate. Should Hillary Clinton become our president, in four or eight years when we watch more of these speeches, my daughter will wonder about a female president what my sons wonder about a black president: why wouldn’t we have one?

As we took in the speeches together, one of our sons began noticing a pattern:

“God has created a rich tapestry in this country,” Tim Kaine said.

“…all of us are created equal and free in the eyes of God,” Barack Obama said.

“Do you have to be religious to be president?” my son finally asked, after the last speech.

I don’t describe my children as anything, religiously speaking. We live in the Bay Area now, where, thankfully, people don’t assess one another by their religious status as much as they might in Kansas, where we moved from. When pressed, I might say my kids are “freethinkers” or we a “secular family.” But what I am is what I am and I let them speak for themselves.

One thing I’ve learned over the past year is that I don’t need to be afraid of religious education. My previous attempts at limiting my kids’ exposure to religion (as a reaction to the indoctrination I experienced as a child) was only, in its own way, encouraging ignorance and discouraging empowerment.

We discuss religion more openly and positively now than we did before I began writing and researching for my book. They’ve taken religious education classes at the local Unitarian Universalist church. They’ve stayed up late discussing God with their Christian cousins. The older two just returned from Camp Quest, a week-long overnight camp for “freethinkers” and then, this week, started CMT. That’s a beloved day-camp, part of their summers for five years now. I assumed when I first signed them up that it was an acronym for Children’s Musical Theater. It turned out to mean Christian Musical Theater.

For the most part, though, they will say they don’t believe in God. The younger one might fluctuate more than her brothers on this, but I expect them all to fluctuate for a long time. Someone told me recently that no one should decide what they believe until they turn forty, which means even I have a few more years to go.

So I look forward to the day when an atheist isn’t the last person the majority of Americans would elect for president.

When it wouldn’t be a threat to Bernie Sanders‘ campaign if someone were to expose that he doesn’t believe in God.

When a speaker doesn’t feel pressured to conclude a speech at a national convention with “God Bless.”

I saw the future when I voted for Barack Obama. I see the future in Hillary Clinton.

And I see the future when I tell my son, “No. You don’t have to be religious to be president.”

July 29, 2016
In Her Nomination Speech, Hillary Clinton Took God Out of the Motto and Embraced Science
Next Post

July 29, 2016 Ohio Judge, a Supposed Church/State Separation Advocate, Puts Godly Sign on Courtroom Wall
Browse Our Archives
What Are Your Thoughts?leave a comment