In Her Nomination Speech, Hillary Clinton Took God Out of the Motto and Embraced Science July 29, 2016 Hemant Mehta

In Her Nomination Speech, Hillary Clinton Took God Out of the Motto and Embraced Science

I, like many others, have been calling for Hillary Clinton to do more to reach out to non-religious Americans the same way she does with every other group making up her base, and her nomination speech last night offered two subtle nods to our community. Neither was perfect. But both were interesting on their own terms. 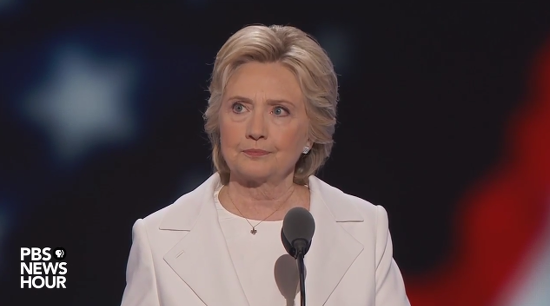 America is once again at a moment of reckoning. Powerful forces are threatening to pull us apart. Bonds of trust and respect are fraying.

And just as with our founders, there are no guarantees. It truly is up to us. We have to decide whether we all will work together so we all can rise together.

Our country’s motto is “e pluribus unum”: out of many, we are one. Will we stay true to that motto?

That’s not exactly true. Our official motto, as any evangelical Christian will tell you (IN ALL CAPS, no less), is “In God We Trust.” President Eisenhower made it so in 1956. “E pluribus unum” was the unofficial motto until that point — it’s on our Great Seal — but never anything more.

You can bet conservatives will come out today and claim this is the first glimpse of how Clinton will take God out of the government, even though it was nothing of the sort.

That said, given the recent push to put “In God We Trust” on courtroom walls and police vehicles as a legal way for government officials to promote religion while on the job, there has also been a secular movement to bring “E pluribus unum” back in style.

Was Clinton thinking about any of that? I doubt it. But surely her speechwriters knew that wasn’t our official motto, which makes you wonder why they phrased it that way.

… I believe in science! I believe that climate change is real and that we can save our planet while creating millions of good-paying clean energy jobs.

There are people out there who will denounce her phrasing — “You accept science; you don’t believe it” — but we all know what she meant. Clinton was rebuking conservatives who deny climate change, embrace Creationism, and promote abstinence-only sex education despite solid evidence it’s not working.

Basically, she slammed the Republicans on the House Committee on Science, Space, and Technology.

On that count, I loved the line. It’s good to know we have a president who values evidence and critical thinking.

But, zooming out, it’s also a really disturbing thing to say in a presidential nomination speech. Have we really sunk this low? Can you imagine a nominee declaring (in the most important political speech of her life), “I believe in gravity”? Or “I believe reading is important”?

Those things should go without saying.

Welcome to America in 2016, where saying science is good is a bold move.

On the other hand, I’m glad she said it since it set her apart from several politicians who treat science as a four-letter word.

Clinton didn’t explicitly reach out to atheists the way she did other minority groups, which is unfortunate especially since a preacher did just that earlier in the evening, but she threw us a couple of bones. I appreciate that. I hope she goes even further in the coming weeks.

By not doing that, the danger isn’t that she’ll lose atheists, per se, since the Republican Party is hardly the place for science enthusiasts or church/state separation advocates, but she risks alienating a lot of voters who may stay home in November or vote for a third party. It wouldn’t hurt her at this point to play up her lip service for our community.

July 29, 2016 My Son Asked Me: Does the President Have to Be Religious?
"That's what he gets for trying to grab God's p***y!"
Nate Preacher: Trump Will Still Win! We ..."
"$76,000 bond for a photoshopped image! I thought I was in America with freedom of ..."
Hayseed Christian Hate-Pastor Steven Anderson Is Still ..."
"Manga isn't my thing, so that's all I've got."
RegularJoe Sparking Outrage, Australia Will Honor Anti-Gay ..."
"Anderson’s a joke. That’s what it has to do with the post."
NotAgain A Contumelious Gal Christian Hate-Pastor Steven Anderson Is Still ..."
Browse Our Archives
What Are Your Thoughts?leave a comment