In a heartfelt and inspiring speech at the DNC, Sarah McBride just became the first openly transgender person to speak at a political convention. McBride is the National Press Secretary for the Human Rights Campaign. 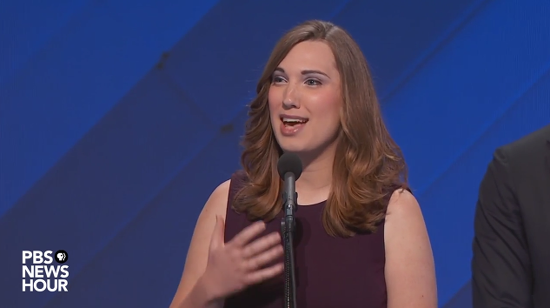 I know this ought to go without saying, but the crowd applauded her from the moment she introduced herself. They cheered her on, as if they were personally going to fight for her cause. What an incredible moment to witness — and something even Democrats shied away from not too long ago. But now they’ve embraced LGBT rights as part of their platform.

Meanwhile, Republicans on the whole still can’t bring themselves to support marriage equality, much less transgender rights. They’re too busy blocking certain people from using the bathroom. If they could get the Supreme Court to overturn the Obergefell ruling, they would.

This is a perfect example of what’s at stake in this election. Do you want a President willing to defend civil rights for LGBT people, or one who’s barely thought about it and chose as his running mate a governor whose reputation is built on discriminating against that community?

As McBride said in her speech:

Today in America, LGBTQ people are still targeted by hate that lives in both laws and in hearts. Many still struggle just to get by. But I believe that tomorrow can be different. Tomorrow, we can be respected and protected. Especially if Hillary Clinton is our president. And that’s why I’m proud to stand here and say that I’m with her.

Watch that video. Look at the images of the crowd. Think about how far we’ve come on this issue since 2008. And then commit yourself to eliminating the discrimination that Republicans support throughout the country, from city councils to the very top of the GOP ticket.