Sen. James Inhofe: “Our Kids Are Being Brainwashed” Because They’re Learning Science in School

Sen. Jim Inhofe (R-OK) may be best known among liberals for his complete denial of climate change. He’s the guy who held a snowball in the Senate, suggesting that it was proof the world wasn’t getting warmer.

He recently appeared on “The Eric Metaxas Show” to talk about how kids are getting brainwashed in school. His evidence? His granddaughter was taught science. 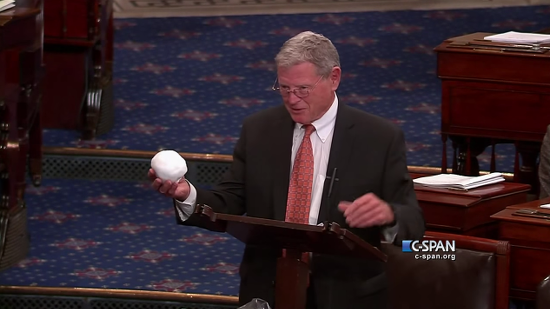 Inhofe recounted a story where “my own granddaughter came home one day” and challenged him over his claims that climate change is a myth.

“I did some checking,” Inhofe said, “and, Eric, the stuff that they teach our kids nowadays, they are brainwash — you have to un-brainwash them when they get out.”

Don’t be surprised by that. Their nominee for President has the same mindset.

July 27, 2016 Ohio Supreme Court Denies Tax Exemption for Couple That Let Priests Stay Over At Their Home
"And yer da's giving handies for a quarter at the truck stop. 😉"
RegularJoe Your Favorite Scamvangelists Are Bragging About ..."
"Cross-country Greyhound. With leaky toilet. And mechanical issues. And a katty-whompus HVAC system. And immigrants.....lots ..."
RegularJoe Your Favorite Scamvangelists Are Bragging About ..."
"It'd be nice to sentence Copeland to an eternity of travelling on the London Underground ..."
Mike Meredith Your Favorite Scamvangelists Are Bragging About ..."
"SQUEEEEEEEEEE!!!!!!!!!"
Mundusvultdecipi Josh McDowell Says He’ll “Step Back” ..."
Browse Our Archives
What Are Your Thoughts?leave a comment