Whenever we hear about Christian pharmacists who refuse to dispense birth control to customers, there’s a common refrain on this site and others: If the pharmacists can’t do their jobs, they need to find another line of work.

That’s what I was thinking about when I heard of a controversy involving Pip’s Original Doughnuts & Chai in Portland, Oregon. 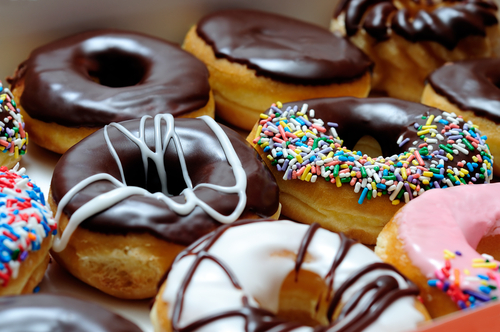 The owners posted an ad looking for a full-time staffer and included a short list of requirements for anyone interested in applying: One year of similar experience. Basic barista skills. Friendly demeanor (“We don’t need another moody hipster providing lame service in Portland”).

No non-medical, non-religious dietary restrictions that would stop you from tasting, accurately representing our food and maintaining quality control to maintain the highest standards of food safety and excellence. We serve products with meat (including bacon) nuts, diary and our doughnuts contain wheat gluten.

That sounds perfectly reasonable. It’s like Taco Bell saying you need to be able to handle meat to do the job. But people were pissed off, criticizing the owners for discriminating against vegans and vegetarians. (As if anyone would actually do that in Portland.) 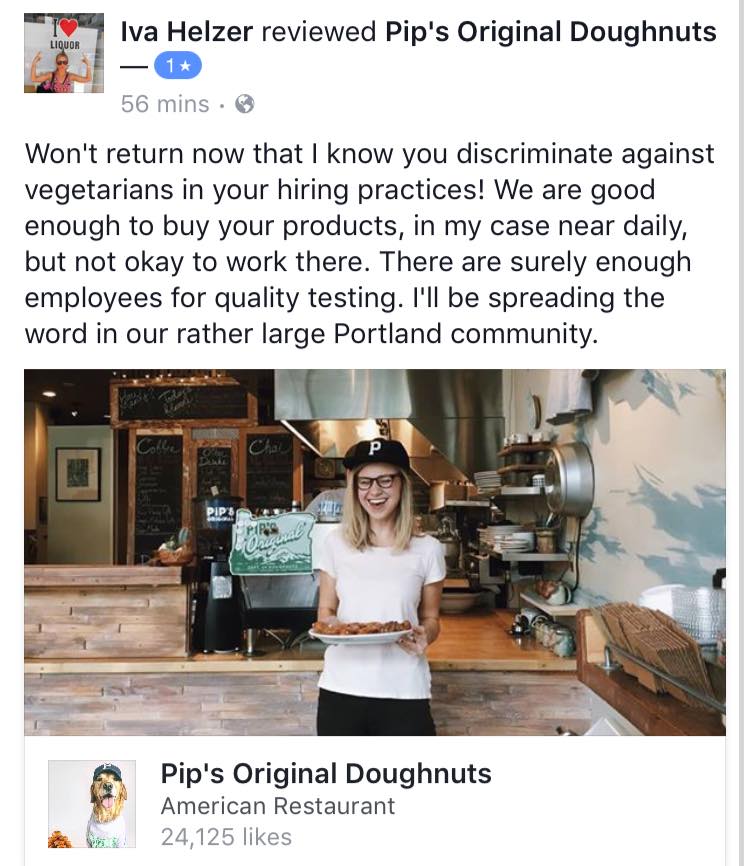 This was NEVER about us versus vegans.

Though the fact that we serve meat [naturally] affects vegans, so equally does the fact that our serving nuts, dairy and gluten naturally precludes others with similar self-restrictive diets.

Hard to argue with that. The only problem I see is that the owners specified that people can’t have medical or religious restrictions. Had they just said “you have to be able to handle the products,” maybe the critics would go away.

But this is completely overblown. It’s another case of progressives being too damn progressive for their own good. No one owes you a job for the choices you’ve made. The owners are simply looking for someone who can do the work they need done, and they’ve gone ahead and announced that vegans who can’t work with meat or allergic people who can’t be around nuts aren’t going to make the cut. They said they’re open to workarounds, but I have no clue what those would look like.

As they said, this isn’t discrimination. Anyone can apply for the job. They just have to be able to do the job. It’s as simple as that.

(Image via Shutterstock. Thanks to Gil for the link)

July 27, 2016
Ohio Supreme Court Denies Tax Exemption for Couple That Let Priests Stay Over At Their Home
Next Post

July 27, 2016 Atheist Group Calls for Investigation into Texas Charter School That Promotes Christianity
"Yup. If I can accept god's extortion of me, then you can accept my extortion ..."
Wisdom, Justice, Love Critic: Beth Moore’s Mild Critique of ..."
"Parts of it is blasphemous when quote in context, too.Specifically the parts that call out ..."
Matri MyPillow Guy: My New Free Speech ..."
"Aren't those F*cking geese bad anuff"
Thomas Grove “Gestapo Is Not Welcome Here”: Canadian ..."
"Ha ha. Looks like you got last year's text book. Do keep up with the ..."
Wisdom, Justice, Love Critic: Beth Moore’s Mild Critique of ..."
Browse Our Archives
What Are Your Thoughts?leave a comment