Dr. Jill Stein Is Anti-Science, Bad for the Environment, and Deserves Her Anti-Vax Label

I’m a strong progressive with socialist leanings, but more than anything else, I’m an environmentalist working for biodiversity — it’s my life’s passion. I campaign hard for Greens running in local elections. While a government environmental scientist, I successfully blew the whistle more than once on politicized agencies’ illegal actions to permit corporate pollution. I pushed my agencies hard to put science over politics and stop dragging their feet on climate change. While working for a non-profit conservation group, I managed successful statewide biodiversity campaigns, criticizing politicians and government agencies who were obstacles. In my personal life, I’m a naturalist and organic gardener, who lectures about gardening for wildlife.

For these reasons, I would not dream of voting for Green Party candidate Jill Stein and will be voting for Hillary Clinton for President. Does this surprise you?  It shouldn’t. 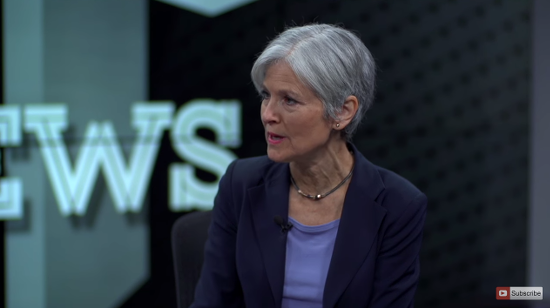 For weeks I’ve been following the debate as to whether Stein is a pseudoscience peddler, wondering if there was any truth to those who claimed she was being unfairly characterized as anti-vaccination and anti-science. I’m not wondering anymore. In an extremely disappointing statement last week, Stein responded to the concerns she’s anti-science when asked about vaccinations:

What I say to those people is that we need regulatory agencies we can trust. I’m definitely not anti-vax; what I have raised is the issue that we need an FDA that’s working for us, that’s not working for the pharmaceutical industry.  I think that makes some people uncomfortable, so they’re trying to smear me as being anti-vaxxer.  I’m not anti-vax; I’m just saying we need good, reliable data so that the American people know what we’re doing.  I mean, it’s like saying the FDA, that has leadership from Monsanto, should tell us what kind of food is safe? No, you get Monsanto out of there, you get the pharmaceutical companies out of there, and then we can trust…

Stein insults progressives like me by claiming the real reason we’re concerned that she’s promoting vaccine distrust is that we’re part of a conspiracy to smear her. Does she honestly not understand our sincere concerns over her accusations that the U.S. vaccination program is untrustworthy and corrupt? That doctors who vaccinate do so without good data? That they don’t know what they’re doing?

Does she not see why we’d be concerned that her accusations rest not on evidence, but known myths and vague, unspecified claims of conspiracies that make reference to Monsanto, which has nothing to do with vaccines?

When you stitch together all her statements about vaccines, Stein’s message is clear: vaccinations are “generally” a good thing, at least in places like Canada, but we can’t trust the U.S. vaccination program.

Stein is actively discouraging Americans from vaccinating their families.

That’s an anti-vax position no matter how you parse it.

Some have argued that the American Green Party is getting away from pseudoscience because it’s eliminating the mention of “herbal medicines, homeopathy, naturopathy, [and] traditional Chinese medicine” in a section that still calls for “the teaching, funding and practice of holistic health approaches and, as appropriate, the use of complementary and alternative therapies.”

This doesn’t change the platform one bit. It merely obscures the details of what it promotes. If you have to remove the explanation of a plank to make it palatable to progressives, perhaps wordsmithing isn’t the issue.

Much as I share the other ideals Stein and the Greens espouse, the organization seems rooted in the past, unable to recognize that encouraging science awareness, not paranoia, is crucial to solving climate, health, food and other modern crises.  Equally troublesome is their continued reliance on the fallacy that there’s little difference between Republicans and Democrats.

Case in point, this little-noticed 2013 speech by Stein in which she describes the difference between the major parties as “window dressing.” Both sides, she claims ludicrously, “absolutely agree on the devastation being heaped” on climate, food, jobs, education, and housing. She also calls for the imprisonment of GMO producers using debunked claims about environmental and health effects, and the supposed suicides of hundreds of thousands of Indian farmers. 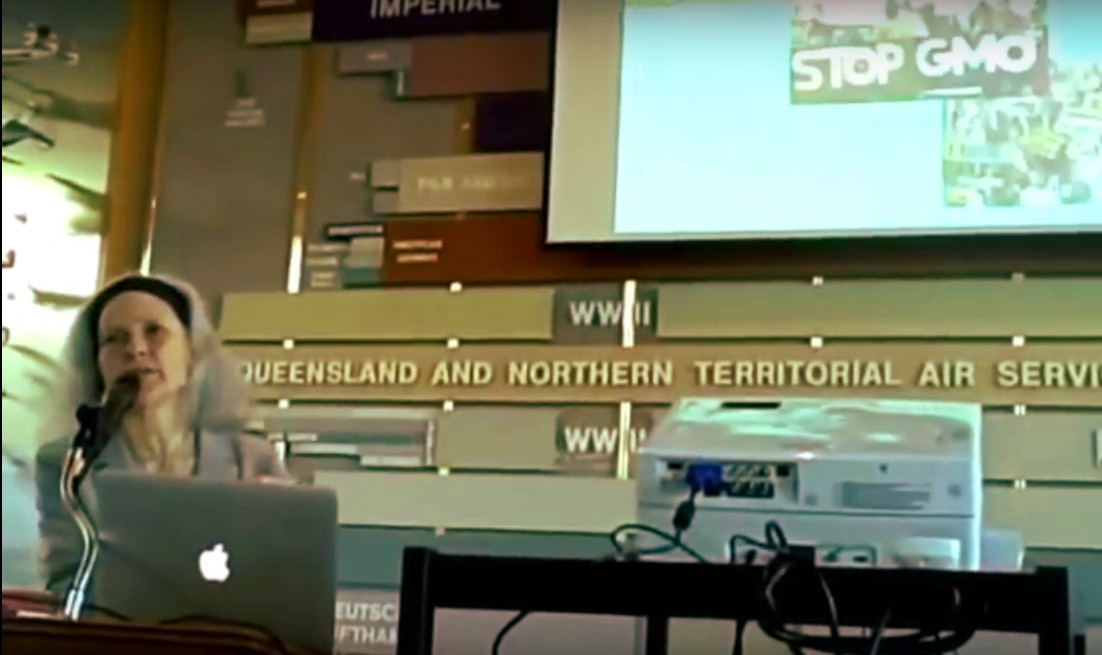 The price of seeds has tripled in the hands of Monsanto… tripled! And the requirement for pesticides goes up. This is extremely expensive. Why does it go up?  Because they create pesticide-resistant weeds. This is just a self-perpetuating cycle for pesticides. GMOs are pesticide-tolerant and their selling point is, “Oh, we can just throw on pesticides now to get rid of the weeds, piece of cake, makes it really easy,” but it doesn’t work that way. It’s actually creating pesticide-resistant weeds, which then require more pesticides, which create more resistant weeds, so it’s a never-ending cycle, and it’s great if you’re a supplier of pesticide, which — guess what —  Monsanto is.  This is all a marketing scheme for Roundup.

And then finally, it corrupts our democracy. These guys have spent a quarter billion dollars on campaign contributions and lobbying in the last decade. A quarter billion dollars in order to buy the policies that permit them to make a killing. And literally, they are making a killing. They spent another quarter million dollars in the last two years alone on advertising to convince people that GMOs are harmless. But you know what, it hasn’t worked, because 91% of people want to put a label on all GMO foods so we can stop eating them… [Applause].

Her well-fed Western audience can afford to hyperventilate over such exaggerations, but I’m sure you know by now that most of the world and the planet cannot. Perhaps the most obvious point anti-GMO activists leave out is that banning GMOs would mean the conversion of thousands more square miles of land to agriculture, creating more pesticides, more waterway-killing fertilizers, and more carbon emissions. And, of course, the story of the mass farmer suicides in India due to GMOs has been thoroughly debunked. In other words, Stein is willing to sacrifice biodiversity on the altar of bourgeois, pseudoscientific food purity.

Then there’s her party’s inflexible stand opposing nuclear power, which almost certainly will have to be part of the solution in accelerating the weaning off of fossil fuels before we do further irreparable planet-wide damage. The climate and oceans can’t afford to wait until better solutions are widely available.

Yet, for all this fear-mongering, Stein apparently sees no irony in accusing fellow progressives of fear-mongering themselves in saying that Greens will yet again deliver us a Republican president:

So don’t let them them intimidate you with that fear-mongering. That’s what it is, it is a fear campaign that’s been engineered to keep you from standing up and using your power. We do have the the power, but you know what? We’ve gotta be able to stand up for it and not back down when they say, “Oh, but you’re going to make terrible things happen.” The reality is, the politics of fear has made all those terrible things happen.

… We’ve gotta be able to stand up and use [our power] and not blink.  When we’re on the firing line, we’ve gotta stand up and say that’s why we’re here, and recognize that the difference between the lesser and greater evil is really window dressing. It’s window dressing. There may be some differences — this isn’t to say there are none — but those differences are not big enough to save your life, to save your job, to save the climate, to save our food system, to save our colleges and our local schools and our housing. They absolutely agree on the devastation that’s being heaped on all those areas.

This may be the worst sin she commits, dismissing the vast differences between the positions of the two major parties on issues of critical global importance, like climate change, ocean protection, and national environmental regulation. Telling Americans this difference is “window dressing” signals a highly disturbing disregard for both science and the environment.

She’s taking a page right out of the right-wing and libertarian playbooks. I cannot and will not accept a Green Party urging common cause with these groups.

Perhaps if Greens directed more energy toward mastering issues well enough to be more successful at the local level, instead of trying to skip straight to the top every four years with insufficient knowledge and experience, they could start doing more good than harm to America.

A version of this article, My Heartbreaking Conclusion: Jill Stein Is Anti-Science, Bad for the Environment, and Now Fully Earns Anti-Vax Label, first appeared on July 26 at Bo Gardiner’s home blog Under the Greenwood Tree​ and is on her Facebook.

July 27, 2016 Christian Preacher Proselytizes Outside CERN (But No One Seems To Be Listening)
"Right?!? Like teh feckin' Vatican is gonna survive another 350 years? Nogodz done bumped his ..."
WallofSleep German Priests Plan to Defy the Catholic ..."
"Shows xtians don't read their bible. Jesus himself said he didn't come to bring peace."
NOGODZ20 NC Pastor Arrested for Uploading Graphic ..."
"Yah, funny how scientists know what they are talking about. Preachers, not so much...."
Brandon Myles An Oregon Church Sued Over COVID ..."
"I had three aunts who were nuns. One died when I was about 10--never really ..."
democommiescrazierbrother Christian Hate-Preacher: The Pope is the ..."
Browse Our Archives
What Are Your Thoughts?leave a comment