Here’s a perfectly harmless ad from the Hilton hotel chain that appeared in the June issue of Travel and Leisure magazine: 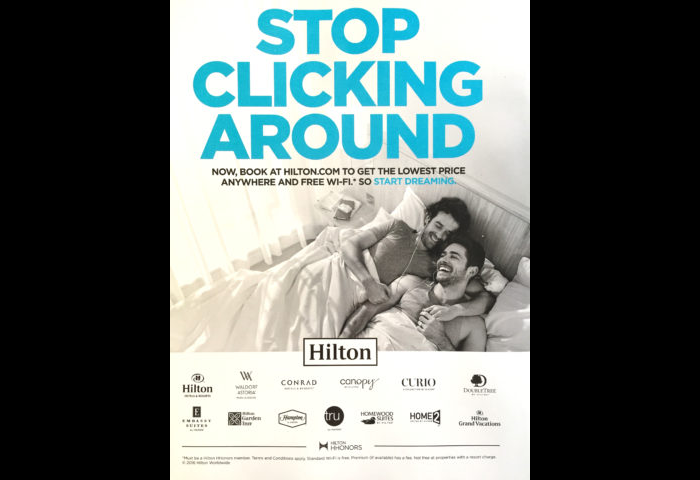 It’s a couple in bed. Which is pretty much what you’d expect from any ad for a hotel room…

But the American Family Association, fresh off a failed attempt to take down Target, is deeply offended because that ad appears in a mainstream publication, and that normalizes the idea that gay people exist!

Travel and Leisure isn’t a gay-specific magazine sent directly to homosexual’s homes. It’s a widely distributed mainstream publication that can be found in many public places such as doctors’ or auto repair waiting rooms.

If Hilton had advertised two men playing tennis, cards, or having lunch, that would have been reasonable. However, Hilton chose to make a cultural and social statement by purposely marketing the promotion of homosexuality to a large segment of the population who finds the idea of two men sleeping together unnatural and offensive.

Second, there’s no “statement” being made. Showing a straight couple wouldn’t be weird. This isn’t weird. It’s only weird if you have hang-ups about gay people, in which case the problem’s on you, not the advertisers.

AFA is urging people to sign a petition telling Hilton Worldwide to “market responsibly.” Which is just Christianese for “Can we please pretend gay couples don’t exist?”

Part of the petition reads:

If Hilton is going to advertise in mainstream media, at the very least, it should promote with images that reflect a family friendly atmosphere.

You know what that means. Hilton should respond with another ad — this time, with a child playing on the bed with his gay parents. Because that’s what families do.

Oh, the joy it would give me to see the AFA staff’s faces if that ever happened…