Bill Nye: “There’s Nothing… in the Bible That Informs Modern Science”

Bill Nye recently answered a question for Big Think about whether science and religion could ever be compatible. 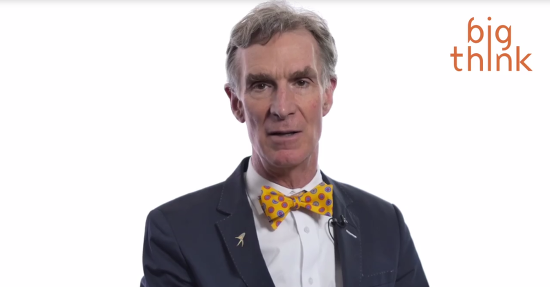 You know a couple of years ago I debated a guy who insists that the Earth is 6,000 years old. That’s completely wrong. That’s obviously wrong. And the way we know it is wrong was a result of centuries of study. People found layers of rocks, figured out where the layers came from. People found radioactive elements which chemically substitute into certain crystals in exchange like rubidium and strontium substitute for potassium and calcium and argon and so on. And this led us to an understanding of the age of the Earth. So if you have a belief system that is incompatible with modern geology… the problem is for the person trying to argue the Earth is extraordinarily young, not for the people who have studied the world around us and understand it.

… The reason in my experience that people my age or whatever go to church is to be with other people. At least let’s say once a week. And that is of great value. A community is of great value. But there’s nothing there that I have seen in the Bible that informs modern science.

A great answer and a sly dig at Creationist Ken Ham. It’s a twofer!

July 27, 2016
A Sensible Scolding of the Bernie or Bust Crowd
Next Post