The Democratic Party Platform is a Breath of Fresh Air for Progressives July 26, 2016 Hemant Mehta

Last week, the Republican Party adopted the most conservative Christian platform we’ve ever seen. It was anti-marriage equality, anti-abortion, anti-transgender, and pro-Bible-in-Schools.

We got something far more progressive and reasonable yesterday when the Democratic Party adopted its platform. Here’s a glimpse at three ways the committee addressed matters relating to religion. 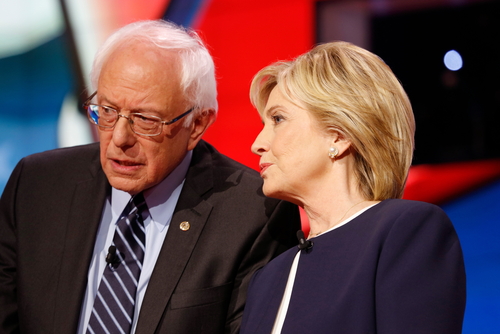 Even though it’s often used to stifle reasonable criticism of Islam, I’ll let that last word slide. This is a plank that says you won’t be discriminated against because of who you are or what you believe. It’s far cry from the GOP and Donald Trump, who targets those who aren’t in the majority in order to take America back to a time when they had even fewer rights.

Democrats applaud last year’s decision by the Supreme Court that recognized that LGBT people — like other Americans — have the right to marry the person they love. But there is still much work to be done. LGBT kids continue to be bullied at school, restaurants can refuse to serve transgender people, and same-sex couples are at risk of being evicted from their homes. That is unacceptable and must change. Democrats will fight for the continued development of sex discrimination law to cover LGBT people. We will also fight for comprehensive federal nondiscrimination protections for all LGBT Americans, to guarantee equal rights in areas such as housing, employment, public accommodations, credit, jury service, education, and federal funding. We will oppose all state efforts to discriminate against LGBT individuals, including legislation that restricts the right to access public spaces. We support a progressive vision of religious freedom that respects pluralism and rejects the misuse of religion to discriminate. We will combat LGBT youth homelessness and improve school climates. We will support LGBT elders, ensure access to necessary health care, and protect LGBT people from violence — including ending the crisis of violence against transgender Americans. We will also promote LGBT human rights and ensure America’s foreign policy is inclusive of LGBT people around the world.

This is absolutely unequivocal in its support of LGBT Americans. There are critics who will say Hillary Clinton was an obstacle to gay rights during her career. They’re not wrong about that, but she’s shifted. So did President Obama. So did other Democrats and most of the American public. Good. I’m glad they shifted. If they moved because it was the right thing to do politically, well shit, I only wished they did that for everything else.

If you’re voting for Trump — or a third party that is destined to lose this year, for that matter — you’re sending a message that you don’t give a damn about LGBT people or their rights.

Democrats are committed to protecting and advancing reproductive health, rights, and justice. We believe unequivocally, like the majority of Americans, that every woman should have access to quality reproductive health care services, including safe and legal abortion — regardless of where she lives, how much money she makes, or how she is insured. We believe that reproductive health is core to women’s, men’s, and young people’s health and wellbeing. We will continue to stand up to Republican efforts to defund Planned Parenthood health centers, which provide critical health services to millions of people. We will continue to oppose — and seek to overturn — federal and state laws and policies that impede a woman’s access to abortion, including by repealing the Hyde Amendment. We condemn and will combat any acts of violence, harassment, and intimidation of reproductive health providers, patients, and staff. We will defend the ACA, which extends affordable preventive health care to women, including no cost contraception, and prohibits discrimination in health care based on gender.

It’s interesting to see the “safe and legal” wording without the word “rare” — an admission of sorts that there’s nothing wrong about having an abortion and therefore no need to make it rare. It’s supportive of Planned Parenthood, supportive of women having access to abortions, and very clear that nothing should get in the way of that.

By the way, the Platform mentions the word “God” three times, all in the context of living up to our “God-given potential.” I can live with that. And when religion is brought up, it’s only to say Democrats will protect religious freedom.

This is a progressive path forward. This is a platform that has veered to the left even from four years ago, and we’re better off because of everything Bernie Sanders did to help it move in that direction. But his contributions and this platform won’t mean anything unless people who care about these issues are willing to vote for the Democrat.

A vote for anyone else in this election means throwing away all this progress because your pride is getting in the way of practicality. How perfect must your life be that you can just ignore how much this platform, if enacted, would improve the lives of so many other people?

July 26, 2016 Miss Cleo, Famed TV "Psychic," is Dead
Browse Our Archives
What Are Your Thoughts?leave a comment