Sen. Cory Booker in DNC Speech: People of “Any Religion or None At All” Deserve Equal Rights, Too July 26, 2016 Hemant Mehta

Sen. Cory Booker in DNC Speech: People of “Any Religion or None At All” Deserve Equal Rights, Too

The first night of the Democratic National Convention was filled with memorable speeches from Michelle Obama and Bernie Sanders, but I have to call special attention to Sen. Cory Booker, who gave one hell of a fiery address and didn’t shy away from including non-religious Americans: 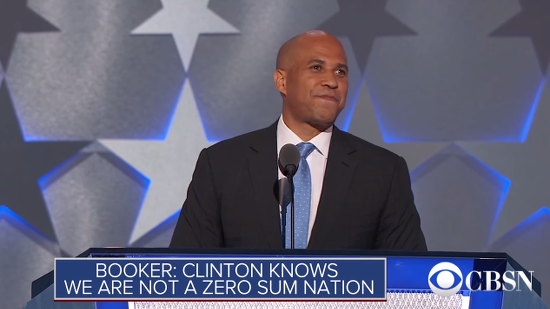 Our nation was not founded because we all looked alike, or prayed alike, or descended from the same family tree. But our founders, in their genius, in this, the oldest constitutional democracy, put forth on this earth the idea that all are created equal; that we all have inalienable rights.

And upon this faithful foundation we built a great nation, and today, no matter who you are — rich or poor, Asian or white, man or woman, gay or straight, any religion or none at all — you are entitled to the full rights and responsibilities of citizenship.

In this city, our founders put forth a Declaration of Independence, but also made a historic declaration of interdependence. They knew that if this country was to survive, we had to make an unusual and extraordinary commitment to one another.

It’s not much. I realize that. Saying that all Americans should have equal rights is hardly a courageous statement. But given how the Republicans are actively chipping away at those rights for those who are gay, Muslim, women, etc., it’s not a bad idea to reiterate the obvious.

It’s also a callback to President Obama‘s 2009 inauguration when he uttered those three little words:

“For we know that our patchwork heritage is a strength, not a weakness. We are a nation of Christians and Muslims, Jews and Hindus — and non-believers.”

Simple, yet so, so meaningful.

I would still love to hear a Democrat speak firmly in defense of church/state separation, promising that religion won’t get in the way of civil rights, that faith-based organizations won’t get to discriminate with federal money, that pastors will not get the special privilege of endorsing candidates from the pulpit while their churches maintain their tax exemptions.

If Sanders didn’t say those things, it’s hard to imagine anyone will. But as the Democrats move left, I’d like to think they’ll realize how important it is to consolidate their non-religious base. Lip service is part of that, but eventually it has to include policies, too.

July 26, 2016 Fox News Host Defends Atheists in Discussion of DNC Email Controversy
Browse Our Archives
What Are Your Thoughts?leave a comment