In Germany, 50,000 Children a Year Are Going Through Atheist “Confirmations”

If you were going through a religious “Confirmation,” it would requires weeks of religious education, attendance at Mass, Baptism, etc. If you’re a believer, though, it’s a powerful rite of passage.

But what do you do in a nation where religion is growing increasingly unpopular? You work with secular groups and offer non-religious confirmations. It’s a real thing in Germany that 50,000 children a year are going through, courtesy of various secular groups: 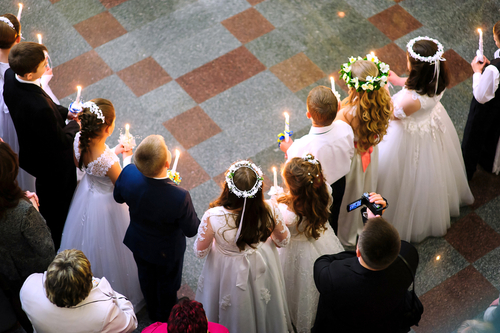 Children are usually between the ages of 14 and 18 when they sign up, and the process involves classes over a 20-week period before they formally graduate. The teens are taken on field visits and museum trips, taught ethics and social niceties and given a textbook covering the main topics: ethics, current affairs and climate change.

“The ones who come are interested in further educating themselves on the secular aspects of life,” said Neumann. That doesn’t mean they aren’t taught about religion; but it’s just one of the things in the curriculum, alongside the constitution, tolerance and evolution.

It’s a wonderful idea. It’s also not unique. The Norwegian Humanists have been conducting a similar program for more than 60 years now.

It’s a great way to educate students beyond the classroom and make them feel like part of something bigger than themselves. You don’t need God for that.

(via Religion News Service. Image via Shutterstock. Thanks to Emma for the link)

July 26, 2016 Gary Johnson, Libertarian Party Candidate for President, Says He Will Protect Atheists' Rights
"It can be addicting. The pastors and preachers know what they are doing when they ..."
firebubbles310 Christian Lawmaker in KS, Arrested for ..."
"Oh it's only metaphorical warfare. So he won't mind if we metaphorically beat him to ..."
Mike Meredith Tony Perkins: Are Christians Trying to ..."
"Woodie be able to fix it, though?"
starskeptic Tony Perkins: Are Christians Trying to ..."
"Yes, here we are, because so many Christians believe that it’s more important for the ..."
San_Ban These Catholics Say Trump Support Within ..."
Browse Our Archives
What Are Your Thoughts?leave a comment